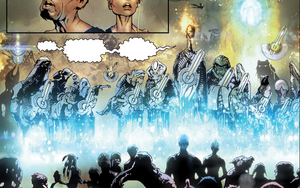 The Congruence was a galactic peace organization.

The Congruence was an assembly of advanced cultures. In its membership the varied species have affiliated in the union of the Congruence to share thought, ideas, and technology, and to establish stability in their galactic region.

The Congruence detected a distress call from a planet of the Harmonious Free of a God-Star. Just as the creature was fleeing from the planet after being deceived by the inhabitants with a telepathic image of a rival God-Star, the Congruence fleet intercepted the God-Star and killed it. They later initiated First Contact with the Harmonious Free, however normal protocols were waived after discovering various alien species were also on the planet from previous crashes. The humans they discovered there were assisted by the Congruence to be transported home to Earth.

The Congruence was led by one with a position known as the High Senator. However it dissolved due to the machination of an insane human xenophobic senator who caused a civil war in order to drive aliens off Earth. However the inverse happened as now with the galaxy in chaos, alien refugees began to flock to Earth as it was an insignificant world far away from the conflict.

Retrieved from "https://aliens.fandom.com/wiki/Congruence?oldid=161316"
Community content is available under CC-BY-SA unless otherwise noted.