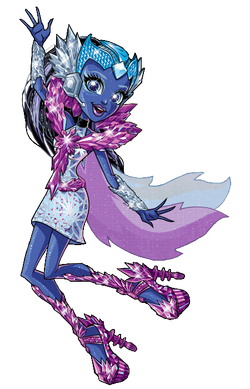 Astranova, the only named member of this species.

Comet Aliens are a sapient alien species from an unknown planet. Not much is known about them, though they apparently travel by comet, hence their name.

The Comet Aliens are violet blue in color, humanoid, and have four fingers on each hand, similar to many depictions of the Greys.

Judging by an individual who goes by "Astranova", they wear flashy sparkly clothing.

A female teenage member named "Astranova" (pictured in the infobox) is the first encountered member of the "comet alien" species (that actually being their name according to her), she also has a family consisting of a mother, father and a grandmother (all unnamed).

Retrieved from "https://aliens.fandom.com/wiki/Comet_Alien?oldid=183804"
Community content is available under CC-BY-SA unless otherwise noted.