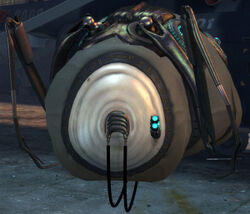 Combine Advisors, sometimes simply known as "Advisors" by the Resistance, "Shu'ulathoi" by the Vortigaunts, and Overseers, are the masterminds behind the Combine occupation of Earth, and are commonly speculated as being the master race of the entire Combine empire.

The Advisors are large, pale, grub-like creatures with no discernible facial features, save a gas mask-like device attached to their front end as well as a cybernetic eyepiece on the left-hand side of the faceplate. Advisors possess a long, prehensile proboscis, which they use to feed.

They do this to humans by plunging the proboscis deep into the back of the neck.

Exactly what they feed on from humans is unknown, though given the position it is most likely blood or spinal fluid.

Each Advisor wears a skintight olive-green body suit that covers all but both ends of their bodies, with a collar around their "necks" adorned with golden glyphs.

Some Advisors also have a pair of spindly black robotic arms strapped to their back that are capable of grabbing and lifting an adult human.

Advisors are seen grabbing humans, both living and dead, and plunging the proboscis deep into the back of their necks.

Combine Advisors have a wide range of odd vocalizations, from robotic growls and groans, to loud shouting noises and screeching. Besides their technological prowess, the Advisors also possess incredible psychic powers.

Combine Advisors were once a race not unlike humans.

Over time, they began to use technology to improve their quality of life.

Eventually, however, they became completely reliant on this technology, and evolved into their current 'grub-like' form.

Full body Advisor
Add a photo to this gallery
Retrieved from "https://aliens.fandom.com/wiki/Combine_Advisor?oldid=176695"
Community content is available under CC-BY-SA unless otherwise noted.