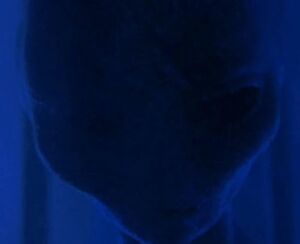 A Colonist in its adult stage.

Endoparasitoid; facilitated by the Purity

The X-Files
The Colonists; also referred to as Reticulans or Greys; are a species of sapient extraterrestrial humanoids from the Zeta Reticuli system which seek the colonization of planet Earth. Members of this species undergo a multi-staged endoparasitoidic life cycle. They are known for being vulnerable to cold temperatures and for their symbiotic relationship with the virus-like organism known as Purity or "Black Oil".

The species has colonized Earth for millions (perhaps hundreds of millions) of years, but left the planet during the ice age periods of the Pleistocene, during which the Human species took control over the planet. As of the 20th century, the aliens have been establishing plans of re-conquering the Earth and taking over humanity; a truth which the American government, and that of other countries as well, struggles to maintain secret from the general public. A global organization of few selected individuals known as the Syndicate has been negotiating an alliance with the Colonists, and taking part in projects dealing with the creation of Human-alien hybrids.

The Reticulans are currently in conflict with an unnamed species of extraterrestrial shapeshifters which has been previously conquered by them. While some shapeshifters work for the Colonists as bounty hunters; others are rebels which seal all orifices on their faces in order to prevent infection by the Colonists' black oil; thus becoming known as the Faceless Rebels.

This species is vulnerable to cold temperatures; which are known to slow down the effects of the Purity and the development of the long-clawed stage. This could explain their sudden departure from Earth during the Pleistocenic ice age periods. They are also deadly vulnerable to magnetite. The fact that the Shapeshifters' toxic green blood also has its effects slowed down by cold temperatures provides a clue for the theory that the Colonists and the Shapeshifters might be closely related, or even belong to the same species; but this remains unconfirmed.

The Colonists reproduce via a close symbiotic relationship with a lifeform known as the Purity. A black liquid aggregation of virus-like lifeforms which are capable of moving and infecting humanoid hosts. A sapient lifeform, the purity is capable of controlling the action of its hosts, and also represents the "life force" of the Reticulans, which retain the black purity within their bodies, even in adult form. Species conquered by the Colonists are also infected by the Purity, which shows itself by covering the host's eyes, making them completely black like those of the Colonists.

Furthermore, the black oil is also their means of reproducing their kind. The purity virus sometimes generates an alien fetus which grows within the host's body, slowly killing the host by consuming organs, bones and tissues. When fully developed, the newborn alien rips open the dead host's body and emerges from the chest cavity as the next stage of life, known as the "long-clawed alien". The higher the environmental temperature, the faster the alien is able to develop; being capable of going from infection to leaving the host in less than 24 hours if the temperature is high enough.

This stage is known for its reptilian appearance and ferocious nature, suggesting that it might possess limited intelligence, and/or self-control. They are larger than the adult form and can be easily distinguished by possessing long claws and sharp teeth. They only live for short periods before molting and emerging as an adult Colonist.

The adult Colonist is similar to what is often described by ufological witnesses: a grey-skinned humanoid with a bulbous head, large black eyes and small mouth. They are intelligent and articulate, contrasting with the bestial ferocity of the previous form.

Relationship with other races[edit | edit source]

There exists a mysterious race of shapeshifters to which belong both the Colonists' bounty hunter servants and the "Faceless" Rebels. While most sources have led to believe that these belong to a different species, which has been conquered by them; a few sources have implied that the shapeshifters and the Grey Colonists are actually one and the same. Most notable is that in the account of a Shapeshifter living among Humans as told to Fox Mulder by Arthur Dales' brother Arthur Dales; the Shapeshifters show what they claim to be their true form and it is identical to that of the Colonists.

While this might suggest that both races are the same, or at least very similar, it is also possible to suppose that the elderly and jocular Dales was either slightly confused or purposefully embellishing his story (or perhaps even making up the whole thing, as there is no other evidence linking to the events described).

Another unexplored possibility is that some non-rebel shapeshifters have integrated themselves in Grey society to the point of considering the Colonist identity and appearance as their "true form". At the end of the story, the shapeshifter outcast Josh Exley is confronted by the shapeshifter bounty hunter who reveals his true face (that of a Grey Colonist) and insists on Exley doing the same, which he refuses, implying that the Human appearance is to be considered his true face. After being executed by the bounty hunter, Exley is shown bleeding Human blood instead of the toxic green blood of his species; implying that he did manage to biologically reject his Grey identity for his Human identity.

True to most ufological reports, the Reticulans make use of huge saucer-shaped vessels. Within one of these abandoned ships in Antarctica, winding labyrinths filled with organic holding pods line the craft.

Retrieved from "https://aliens.fandom.com/wiki/Colonist?oldid=181938"
Community content is available under CC-BY-SA unless otherwise noted.