Alien Species
Register
Don't have an account?
Sign In
Advertisement
in: Sapient Species, Descendants of Man, All Tomorrows Universe,
and 10 more 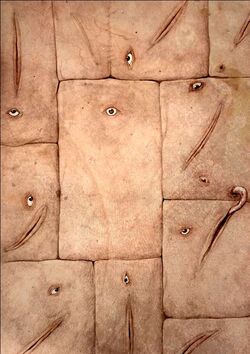 about the same weight as a Human

Both sexual and asexual

Evolved into the Modular People

Nemo Ramjet
The Colonials were a posthuman species created by the Qu from a colony of the Star People. Since their colony fought especially hard against the Qu invasion, they were punished in the worst way, by being forced to filter Qu waste products.

The Colonials had immobile cuboid bodies with orifices for filter feeding and reproduction, sexual as well as asexual. They retained the complex eyes and the high intelligence of their human ancestors, although only bearing the most basic nerves, so they could suffer the most from their fate as living filtering devices for the Qu for the next forty million years.

The Colonials were created from a colony of Star People who successfully repelled a Qu invasion twice, only to succumb to the third invasion. Following a twisted sense of "justice," the Qu turned the Star People into the Colonials as a form of punishment, purposely letting them retain sapience and utilizing them as living waste disposal units. After the departure of the Qu, the Colonials continued to reproduce until they covered the planet in fields of human flesh.

They eventually evolved into diverse forms that formed specialized colonies. Every individual had a different function in each colony and benefited from the functions of the others. Some colonies grew enormous tap-roots that were able to siphon resources from far away. Others abandoned roots altogether and began to move themselves on starfish-like foot segments. Some colonies came up with units equipped with claws and poisons, taking competition to a brand-new, deadly level. Others responded to the threat with armor-plating, or watcher-cells equipped with enormous eyes. One of the colonies were the Modular People.