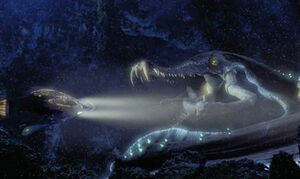 Star Wars
The Colo Claw Fish is a huge non-sapient opportunistic predator native to the oceans of planet Naboo. This elongated beast is known to feed on everything it can swallow. Its only natural predator is the Sando Aqua Monster.

Colo Claw Fish are bioluminescent. The light they produce on the sides of their body is used to attract prey in the dark deep waters. They have no limbs to speak of, but possess two large clawed appendages on the sides of their head, which are used to hold the prey while they're eating. They have a large mouth filled with sharp teeth, and two short eyestalks. Their jaws can unhinge and their stomach can expand, enabling then to swallow much larger prey.

During the Invasion of Naboo, a sleeping Claw Fish was woken up by a sub. It lunged at the sub with its mouth open, but the sub turned to escape so the Claw Fish pursued it. As the exit of the cave came, a Sando Aqua Monster appeared, preparing to devour the sub but it went upwards. The claw fish attempted to go around the Sando but the monster turned the same direction, bit down on the Claw Fish and devoured it whole.

Retrieved from "https://aliens.fandom.com/wiki/Colo_Claw_Fish?oldid=189177"
Community content is available under CC-BY-SA unless otherwise noted.