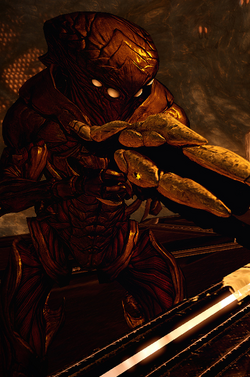 Mothership located in the Galactic Core

It is unknown if the Collectors have separate sexes but it is highly unlikely, since their innards have been largely replaced by cybernetics to compensate for their long-term indoctrination

Created by the Reapers (through alteration of Prothean DNA)

Living beyond the Omega 4 mass relay in the Terminus Systems, the mysterious Collector species is glimpsed so rarely as to be taken for a myth by most in galactic society. In reality, Collectors are human-sized insectoid bipeds and can resemble massive winged beetles. They are a terrifying force in the galaxy, responsible for the murder of hundreds of thousands.

Collectors generate permanent stasis fields around themselves, creating nightmarish red-shifted energy fields. In battle, they hold position whenever possible, relying on their aggressive biotics and nearly limitless power. Several types of bipedal Collectors have been identified, including minions, defenders, zealots, assassins and artillery-operators.

Acting together, Collectors have imprisoned entire cities in stasis. While no definitive forensic accounting exists to explain the fate of those imprisoned, leading speculation is that victims are harvested for scientific experimentation and neurobiological repurposing. In truth, they had been discovered by Commander Shepard to be creating a new reaper.

The Collectors are an unusual race, in that they are very rarely seen, so few people have actually seen one most people believe they are a myth. The reason for this is because the Collectors live beyond the impassable Omega 4 Relay: numerous ships have attempted to use the relay, but to no avail - remains of thousands of unfortunate ships litter the system on the other side.

Why the ships never return is mystery to the citizens on Omega, the huge space station-like city nearby, and elsewhere; some speculate there is a giant black hole on the other side, raising the question of how the Collectors use it. Another myth is that there is a paradise of amazing brilliance on the other side so the curious people who have made the journey don't return to that hellhole of Omega. The myth with the most truth in it is that the Collectors either detain or destroy any ships that enter their space.

The Collectors also use Agents to collect interesting specimens to study, further reducing their need to leave their home.

However there was some Prothean survivors on the planet Ilos, knowing there were far to few to sustain a populations and to revive the species, the Protheans conducted a suicide mission to stop the Reapers from wiping out the next Empire. They used a relay they had constructed on Ilos' surface which led to a secret relay on the Citadel (it would be known as the "Relay Monument" in the future) to reprogram the Keepers to ignore the Reaper signal when the time came for the Reapers to return (as the Citadel and mass relay technology was, in fact, truly of Reaper origin and intended as a trap for other races). The plan was to cause the Keepers to not open the relays to the Reapers: this worked, however the Protheans couldn't return to Ilos as the Citadel's Relay worked one-way only, and they are believed to have starved and died.

The Protheans on Ilos believed the slaves were killed when the Reapers were finished with them; in fact, the Reapers used cybernetic implants to compensate for the lack of growth due to the indoctrination and eventually this transformed them into Collectors. Some theorise that the Reapers did this to the Keepers, as well, with the belief that the Keepers may have been the very first race claimed by the Reapers.

After the Reapers left, Harbinger permanently possessed the collector general and ordered them to collect things like technology and rare organisms.

Collectors look like giant insects, they have wings which they use to ambush enemies without (or with very little) warning, increasing their chances of killing their enemies. They possess natural body armour that while slightly inferior in toughness to the manufactured armour of other races is capable of self-repair, they also make heavy use of their natural biotic abilities to erect a biotic barrier around them. Certain types also use this to create a stationary barrier field which allows collector weapons fire through but repels that of other races. Every now and then the Collector General (Harbinger) takes control of one of the Collectors - this makes the controlled warrior incredibly difficult to kill and grants the ability to fire multiple powerful biotic blasts from its body.

The Collectors were originally Protheans that were indoctrinated by the Reaper's to be used as deep-cover, nigh undetectable agents. However, the Indoctrination slowly turned these agents into mindless, dribbling husks of their former selves. To combat this, the Reaper's modified them with cybernetics in an attempt to stop them from being turned into said mindless, dribbling husks. Over time, their minds became so badly damaged by the Indoctrination, that the Reaper's were left with no choice but to give these poor Protheans an extensive genetic rewrite in order to keep them as their slaves while not having a bunch of brain-dead aliens as their army. In the end, their DNA was changed to have 3 less chromosomes, reduced amounts of superfluous "junk" sequences and a reduced Heterochromatin signature. All of these factors gave rise to the scourge of the Terminus systems, The Collectors.

For more information on the Collectors see: Collector