Alien Species
Register
Don't have an account?
Sign In
Advertisement
in: Articles that Need to be Rewritten, Sapient Species, Cloned Species,
and 14 more 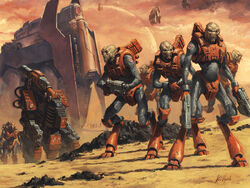 The Cogs facial features resemble those of the Greys, but are spiny looking in slim armor. They stand about twice the height of the humans counterparts.

The Cogs are genderless creatures, but during reproduction a pair assumes either an “active” or a “passive” role. The active Cog transmits its genetic code in order to produce an exact copy using the passive Cog as an incubator. The incubating Cog introduces a few subtle genetic variations which ensure variety amongst the species. After a short period of growth, a miniature replica of the “father” is grown within the incubator before the clone is spawned from it.

The Cogs rose from the mud swamps of Origin 4, three hundred and fifty thousand years ago. They were aggressive, highly territorial race, creating a civilization founded on permanent war between the various individuals from which it originated.

The “War of the Lines”, was considered a dark period for the Cogs, but the Lines emerged from the conflict as a result. Each Cog was driven by a powerful reproduction instinct which compelled it to subjugate other Cogs and incubate them with its genetic code. The resulting self-replication gradually allowed them to fully colonized their planet. During this period, the stronger Cogs thrived but their dominion was short lived as technology advanced, thus the most intelligent and ingenious Cogs gained the upper hand.

After thirty thousand years, the Cogs had dominated their environment. The War of the Lines evolved into a simple competition which yielded true scientific and technological progress.

The Cog civilization harnessed their natural cloning abilities investing deep into genetic research. While they barely mastered space travel, the Cogs’ expertise in biology allowed them to alter their genetics at will.

Their knowledge in the field of gentics allowed them to add numerous abilities to their gene pool: enhanced intellect, longevity, etc. The Cogs eventually harnessed immortality, but their competitive nature made it impossible for their brethren to experience eternity for more than a few centuries.

Th Cogs then developed in a new direction. The conception of the “Original Ones”, Masters of the Great Lines, were installed as the leaders of the Lines and the ones granted immortality. They commanded the Lines granting its chosen children to become its Executives so that they rule in their stead. Other lesser ranked were created with limited intellectual and physiological capacities and their life expectancy was artificially shortened.

The Lines under the Original Ones were programmed to be of unfaltering loyalty. Since this new system the Cogs made rapid progress in cybernetics which increased their abilities far beyond what flesh could naturally support.

After two hundred and thirty thousand years of evolution, the Cogs reached their modern form. They had become what other species now refer to as “Cogs”, as every individual of their kind is only considered a part in a greater machine - a machine of which the Original Ones are the absolute masters.

Due to Origin-4 becoming overpopulated, the Lines began the conquest of space. While some chose to create slow spaceships, others invested in advanced physics research to discover the means to travel faster and farther.

As the Cogs explored new planets they discovered other intelligences existence among the stars. Experiences with these civilizations varied amongst the Lines. Some chose to subjugate these planets through force and engaged in war. Others were more observant and decided to negotiate, exchange, and trade with the civilizations they encountered.

The Cog Empire was formed after two hundred and thirty years of space exploration and colonization. Thirty-two Lines shared as many spheres of influence at the heart of the galaxy.

This bountiful period constituted the Golden Age of the Cogs. This was a period during which their species believed that anything was possible: the era of the Empire of the Thirtytwo Lines.

Encounter with the Therians[]

For thousands of years, the Cogs witnessed the disappearance of stars from their skies. The Cogs were never able to establish a relationship with the vanishing stars, until the arrival of the Therians.

When the Therians reached the borders of the Cog Empire, the Cogs taken by surprise believing they had ample time to devise a strategy. The Therians pace of attack allowed them to eradicate two more lines within a six month time span. The empire collapsed under the blow, not from the invasion but from internal fighting. The balance of power between the various lines had been weakened. This balance that had been purposefully maintained by all Lines was broken with the loss of the first Line, now jeopardizing the entire Cog Empire. The destruction of three additional lines triggered the return of a sinister dark age of civil war.

By BT-98,956, only four Lines remained. The Therians had destroyed seven. Twenty-one more had either been annihilated during the infighting or had been absorbed by one of the four successful lines that prevailed.

After the Cogs had reduced the size of their empire, facilitating communications amongst themselves, they launched a campaign of retaliation against the Therians. The four surviving Lines concentrated enormous quantities of resources. Each of the four remaining Original Ones ruled nearly two thousand five hundred star systems apiece. Before the fall of the empire, even the most influential among them controlled less than four hundred systems.

Two years later, in BT-98,951, the Cog fleet launched its counter offensive. They fell upon the Therianization machines and freed more than one thousand worlds.

In BT-98,950 a hastily assembled Therian fleet met the Cog armada in the LV-421 system, Zeta Reticuli, and was annihilated. The Cogs quickly finished the re-conquest of their former worlds. The Therians had originally captured over two thousand five hundred Cog star systems but after only a year of war, all but one hundred of these systems were recovered.

After ten months at war, the fleet of the four Lines had amassed five million warships, and captured more than a thousand Therian star systems.

The Wrath of Karma

The Karmans joined the battle during the year BT-98,948, and with their arrival victory quickly changed sides. Up to this point, the Original Ones had thwarted the unmethodical strategies of the Therians, who had lost their martial knowledge as an advanced species.

The Karmans suddenly altered the situation using stealth ships of less than five thousand ships. The Karmans launched a guerrilla war in space, crippling the Cog warfront to a standstill.

The Karmans were not victorious, nor could they ever hope to be. Their forces were too few to occupy more than one or two star systems. The Cog Empire had no hope of winning either. Making their entire empire Karman-proof would have required excessive personnel, and constant effort.

The C-naps Line offered the following agreement: the Therians stayed where they were and they would be granted the worlds which they had damaged beyond repair as well as those that were of no use to the Cogs. For their part of the bargain, the Cogs retained the star systems already conquered and which still contained useful resources. The negotiations were complicated, but after a few revisions, in BT-98,939 the draft-agreement was finally established.

A serious issue remained unresolved: the three other Lines were never going to concede anything. If C-naps had suffered any serious damage, it was its own problem. The other Lines kept on fighting.

The Karmans had anticipated the negotiations with C-naps, and so they turned their fleet to the territories controlled by the other Lines. A second and third Karman fleet began to ravage the rest of the Cog Empire for another two years.

In BT-98,937, C-naps put its agreement on the table and it was accepted. Not only did the war end - the front was frozen. It was to remain so for ninety thousand years.

The Cog civilization, held in check by the Karmans, stagnated during the ninety thousand year truce. Their era of discovery and development had slumped, and ultimately come to an end. The Cogs instead turned inward forcusing on consolidating their holdings and resources. It took fifty thousand years for the Cogs to do so. After this first phase of intense exploration, the Cogs assimilated other civilizations which had allied with them. This period of absorption took an additional ten thousand years.

The next thirty thousand years saw the Cogs enter a period of technological and commercial guerilla warfare under the leadership of the C-naps Line. Knowing that they couldn't win a direct war with the Therians, they decided it best to arm the enemies of their enemy.

But their attitude changed in AT-0. The Cogs’ certainties were shattered when the Avans revolted against their “creators” and they were able to repel them. Taking the Avans example the Cogs followed suit and in the year AT-43, are ready to resume their war against the Therians.

Being a Cog means being part of a vast organization whose core and leader is an Original One, a being whose genetic code is reproduced in each of its servants.

However, there are fundamental questions that have set the Cog civilization in motion and every Cog is working towards the answers: What is genetic perfection? Which qualities are mandatory for a genetic code to be considered absolutely perfect? Each Line has come to its own conclusion.

Every Cog is an imperfect replica of the Original One ruling the Line. These imperfections are not random; the Cogs have long mastered the art of altering genetic codes. In fact, they have purposely defined beings to perform only a selection of tasks, enabling them to do no more – which would be a waste of resources – and no less – making them less effective than what they were created for.

The term “Cogs” is a practical abbreviation used by biologically and technologically inferior civilizations. The Cogs are, in fact, a rather flexible alliance of the four most successful genetic lines to which their kind gave birth. Each Line considers itself a civilization of its own, or what non-Cog societies would refer to as a “species” .

Therefore, the history of the Cogs is the history of these four Lines, the discoveries they made, and the wars they waged in order to demonstrate their supremacy. It tells how these Lines eventually overcame their differences to form the Cog Empire.

It also recounts how Cogs became, almost against their will, a united civilization in order to defend themselves from the other aggressive species that populate the universe. It describes how they once believed that there was an end to evolution; how they were convinced they had reached it… And how, in AT-43, they realized there was still a long way to go.

Cogs engage in trade with other races, sometimes incorporating their DNA into their to improve themselves. However the Cogs are entirely materialistic, trading in resources and having very little interest in philosophical values.

The Cogs are divided into four Lines, each a civilization or subspecies of their own. Despite their rivalries, each Line plays an important part in maintaining the Cog Empire.