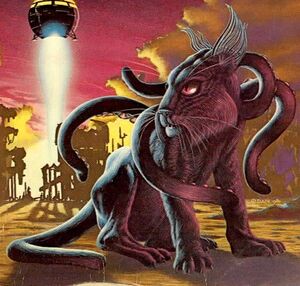 A. E. van Vogt
The Coeurls are a sapient species which were genetically engineered by the extinct race of a small world orbiting a red sun. The Coeurl homeworld is a moonless planet in a system that has no other planetary bodies or even asteroids; a fact which prevented its inhabitants from creating spacefaring technology.

The Coeurls have the appearance of a black panther, but with its forelimbs longer than its hind limbs, and a couple of long tentacles protruding from its shoulders. Each tentacle ends in suction cups that allow it to manipulate tools. In the place the ears would be there is instead two tufts of whiskers, which can receive and transmit radio waves with which the creature communicates.

These beasts are notable for being able to survive both in an oxygen atmosphere and in a chlorine atmosphere, though whether they breathe both gases or neither is not known. They are able to directly manipulate energy in many forms, including electrical, and feed on the energy of living cells by removing potassium.

Retrieved from "https://aliens.fandom.com/wiki/Coeurl?oldid=173783"
Community content is available under CC-BY-SA unless otherwise noted.