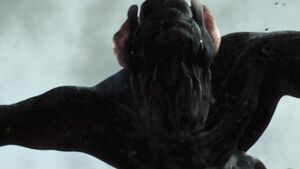 Cloverfield
The "Cloverfield Monster", a.k.a. "Clover", or Colossus, are a species unidentified daikaiju-sized creatures. One emerged from the Atlantic Ocean to terrorise the city of New York in 2008. It grew to gigantic proportions due to consuming Seabed's Nectar. An unknown number of these monsters attacked Earth in 2028 after the particle accelerator malfunction.

The Cloverfield Monsters are a species of extra-dimensional creatures that were brought to our universe through a malfunction of the Particle Accelerator in the Cloverfield Station orbiting Earth.

In 2008 an infant member of this species was transported to a version of Earth because of the malfunction in the particle accelerator in 2028. This creature emerged from the Atlantic ocean destroying a drilling station before attacking New York.

In another dimension in 2028, humans are running out of energy and on the brink of war. The crew of the international space station known as the "Cloverfield station" attempt to test a particle accelerator in an attempt to get unlimited renewable energy; however, the test goes wrong, causing multiple parallel dimensions to collide and Cloverfield Monsters from one of the dimension to attack ours. It is unknown how many of these monsters attacked Earth, but one adult-sized monster can be seen emerging from the clouds and roaring as the 2 surviving members of the space station return to Earth.

Retrieved from "https://aliens.fandom.com/wiki/Cloverfield_Monster?oldid=193900"
Community content is available under CC-BY-SA unless otherwise noted.