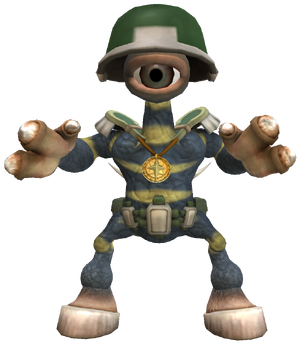 The Cloppity is a race of cyclopia-like creatures that can be encountered within the SPORE Universe.

Cloppities are human-like in posture, but have numerous differences in anatomy. Their bodies are covered in yellow stripes on top of blue, cobble-scaled skin. They have three-fingered hands, and large hoofed feet that make a "clop" noise as they move, hence the races' namesake. Their backs also are covered in notably long, sharp spines as protection.

Outside of their large hooves, they also have a very large eye centered on a thin, short neck. It is unknown as to how they consume food, though they are observed to eat primarily meat, making them carnivorous. How they exactly eat these substances without a notable mouth is currently under study.

The Cloppity, both as a creature and as a race, are considered both self-gaining and a bit bias in their world view. Even before they became sapient enough to create tribal living, the Cloppity race is a slightly territorial creature and, while antisocial towards other creatures, are fairly friendly towards their own kind, known to live in fairly large groups in open areas.

This similar kind of world view extended into their self-aware state, and history of Cloppity revealed Tribes of this race had a similar bias to other tribal creatures, only more docile towards their own species. It is notable at points in their history though that tribal Cloppity had made alliances with other types of animals, but these are mostly due to self-interest: be it either allying with stronger races to raid a rivaling clan, or to better hunt their own food.

Retrieved from "https://aliens.fandom.com/wiki/Cloppity?oldid=182673"
Community content is available under CC-BY-SA unless otherwise noted.