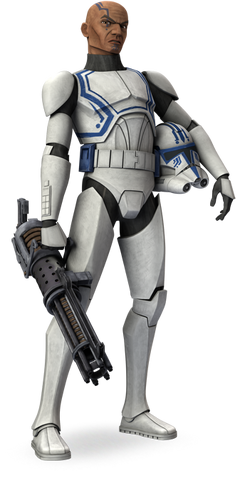 Similar in appearance to a human

Cloned by the Kaminoan people to fight in the Republic Army

George Lucas
Clone Troopers are a species of sapient clone soldiers genetically created by the Kaminoan race using the DNA of the Mandalorian bounty hunter, Jango Fett. Manufactured on the water planet of Kamino, they were created to be used as the primary military force of the Galactic Republic during the Clone Wars, and had various enhancements that normal human or alien soldiers would be unable to achieve.

Clone Troopers were created for one purpose, combat, meaning that their entire culture was solely based on nothing but the idea of fighting and dying in the heat of battle, while in service of the Galactic Republic.

A request for an army turned asunder Edit

In the years following the Trade Federation's invasion of the planet Naboo, the Galactic Republic had began to slowly break apart, as criminal and pirate gangs began to attack planets under Republic protection in the Outer Rim. Along with this, several citizens within the Republic, such as the Skakokoan and the Neimoidians, were threatening to break apart from the Republic and start their own Separatist Alliance. Due to these dangerous threatening to break the union of the Republic, Jedi Master Sifo-Dyas, requested that an army be created to better defend the Galactic Republic. Although requests were rejected by the Jedi Council, Sifo-Dyas would still attempt to create an army to defend the Republic. This mission would lead Sifo-Dyas to travel to the Outer Rim planet of Kamino, where he would make a deal with the native Kaminoans, who were known for their expert cloning techniques, to begin construction of a Clone Army for the Republic. This plan would be discovered by the former Jedi Master, Count Dooku, and his new Sith master, Darth Sidious, who decided to use this Clone Army in their plot to take over the Republic and destroy the Jedi. They two then hired a criminal syndicate, the Pykes, to kill Sifo-Dyas, and then travel to Kamino, posing as Jedi, to tell the Kaminoans to implant a control chip into the minds of every Clone produced for the Republic Army. These control chips would, when activated, force the Clones to kill any Jedi they come into contact with, naming the activation command, Order 66. Dooku would also hire a Mandalorian bounty hunter, Jango Fett, to be the genetic template for the Clones, as Jango was renowned for being a skilled Jedi killer.

Just before the start of the Clone Wars, the Clone Troopers would be discovered by the Galactic Republic after the Jedi Knight, Obi-Wan Kenobi, found out about their existance while tracking down Jango Fett and his son Boba Fett, before later getting captured by Separatists on Geonosis, and indirectly starting the Battle of Geonosis. Following their discovery by the Republic, the Clone troopers would swear loyalty to the government, becoming the main military force of the Republic, being led by the Jedi Order into battle against the Separatists and their Battle Droid armies. The clones were used in almost every battle during the Clone Wars, being excluded out of only a few battles during the war, such as the Battle of Onderon and the Second Battle of Florrum.

Near the end of the Clone Wars, the Separatists began attacking numerous planets allied with the Galactic Republic in the Outer Rim, as well as the Republic capital planet Coruscant. This forced the Republic to send out large battalions of Clone Trooper, usually led by only one or two Jedi. During these many battles against the Separatists and Republic clones, Republic Supreme Chancellor Palpatine, who was secretly Darth Sidious, activated Order 66, forcing all of the Clones in battle to halt their battle with the Separatists to eliminate their Jedi Generals. This act successfully killed off more than half of the entire Jedi Order, with only a few Jedi, including Yoda and Obi-Wan, surviving the betrayal. Along with this, some Clone Troopers themselves denied Order 66, overcoming their inhibitor chips, as seen with Clone Troopers Captain Rex and Commander Wolf, and even with a few elite Clone Commandos denied the Order, as seen with all of the members of Ion and Omega Squadron.

Rise of an Empire Edit

With the Jedi Order destroyed, as well as the Separatist leaders being killed by Palpatine's Sith apprentice, Darth Vader, on Mustafar, Chancellor Palpatine was able to reorganize the Republic into a new galactic order, the Galactic Empire. With this new change of allegiance, the Clone Troopers were integrated into the new Imperial Army, becoming Imperial Stormtroopers and aiding the new Empire in securing control of the galaxy fighting Separatist Holdouts, Pirate gangs, surviving Jedi, and early rebel cells before being decommissioned from service. Following this, most Clones either volunteered to train new human recruits for the Imperial Army, while most others completely retired from the Empire, either living out their lives as civilians in the galaxy, or becoming mercenaries for hire.

Spraati Clone Troopers were a subspecies of Clone Trooper created by Darth Sidious using Kaminoan cloning technology that was later used by Chiss Grand Admiral Thrawn to create a massive army for the remaining Imperial forces in the galaxy after the Battle of Endor. These clones were created from a number of different specimens, but a few were created with the original Jango Fett DNA. One of the most well-known of the Spraati clones was Luuke Skywalker, a genetic clone of Jedi Knight and hero of the Rebel Alliance, Luke Skywalker.

Retrieved from "https://aliens.fandom.com/wiki/Clone_Trooper?oldid=184661"
Community content is available under CC-BY-SA unless otherwise noted.