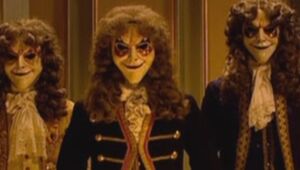 The Clockwork Repair Droids were androids that served on the SS Madame de Pompadour and its sister ship, the SS Marie Antoinette. The former stalked Madame de Pompadour in 18th century France, believing that they could repair their ship by taking her brain. The former wore 18th century French clothing to blend in with the people of the era and were clockwork instead of electric so they could function if their ship's power was depleted. The latter crashed in Earth's distant past and remained hidden until the Victorian era when their control node tried to repair the ship with both organic and mechanic material from Victorian London to take them to the "promised land". They disguised themselves using human skin taken from their deceased victims.

They followed camouflage procedures to blend into the surroundings. This could be as simple as dressing in appropriate costumes to match the time periods they found themselves in - despite looking somewhat unrealistic. A more drastic procedure of camouflage was the harvesting of human skin and organs to outwardly appear human. They could be equipped with short range teleporters, scanners, tranquillisers and tools within their wrists for part removal. In the case of the Clockwork Droids aboard the SS Marie Antoinette, they were able replace their tools with local spare parts, such as sword blades. They could also heat themselves if they were frozen and empty unwanted fluids from their system. Whenever they entered a room, they made "tick tock" noises from their clockwork parts. They broke any clock in the room to avoid raising suspicion.

The SS Madame de Pompadour Droids' only purpose was to fix the ship. When the ship was damaged in the Dagmar Cluster in an ion storm, they lacked the right parts. They used the crew members' body parts; according to the Tenth Doctor, "No-one told [them] the crew weren't on the menu." The last part they needed was a brain for their command circuit, and they believed that only the thirty-seven-year-old brain (the same age of their ship) of Madame de Pompadour would work. They modified the ship's warp engines to open many time windows to 18th century France and passed through it at various moments of Madame de Pompadour's life, attempting to find her in her thirty-seventh year. The Doctor defeated them by disconnecting the time window that led back to their ship. With no purpose, they shut down.

The SS Marie Antoinette crashed on Earth before the birth of the human race. Its robot crew managed to remain functional by constantly replacing the faulty parts with both organic and mechanic spares collected from their surroundings. These "spare parts" included Dinosaur organs and Roman metalwork. However, as of the late19th century, they changed their components so many times that almost nothing remained of the original androids. By that time, their ship had been reworked into a fake restaurant where unaware human victims were abducted and their organs harvested; the bodies were then burned to hide the missing parts. When the droids murdered a Tyrannosaurus rex accidentally brought forward in time by the TARDIS for its optic nerve, thefreshly-regenerated Twelfth Doctor found their base of operations and confronted their control node aboard the escape capsule of the ship - an enormous hot-air balloon made of human skin. The robots deactivated when the Half-Face Man fell to his death on the top of Big Ben.

When Es'Cartrss tried to take over the Tenth Doctor's mind via the TARDIS' Matrix, he used his memories of the Clockwork Droids to attack him.

The Tenth Doctor, after having assumed the identity of John Smith, had a drawing of a Clockwork Droid in A Journal of Impossible Things.

The Doctor encountered a different type of clockwork android during his ninth incarnation. Shade Vassily made an almost perfect human-looking clockwork droid to distract anyone who came looking for him, but the Doctor figured out he was clockwork. Clockwork Cats which shot lasers out of their eyes protected Vassily, but the Doctor and Melissa Heart reprogrammed one. Melissa also had two clockwork knights to do her bidding, both of which were destroyed; one was used to repair the clockwork cat, and the other sacrificed itself to save London.

Retrieved from "https://aliens.fandom.com/wiki/Clockwork_Droid?oldid=180160"
Community content is available under CC-BY-SA unless otherwise noted.