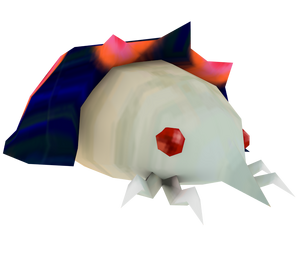 The Cloaking Burrow-nit is the namesake for the Burrow-nit family group on PNF-404. It is the first burrow-nit to be discovered, this species found by Captain Olimar. It is a close relative to the Joustmite.

As the name implies, the Cloaking Burrow-nit spends much of its time buried underground, its frontal body buried while its shell is exposed at the surface. Its normal body is pale with white skin and red eyes. Its shell is patterned with blue and large red-eye patterns, mirroring a snake's face as is common with members of the species. The patterns on said shell are to deter larger predators.

They are ambush predators, and do not chase after prey. They've been observed buried with their shells exposed for hours at a time, only moving freely during the cover of night. If approached by small prey, they will move and try to skewer their prey with their needle-like proboscis. This proboscis is able to be shot out at a impressive range due to its muscular structure being fixed in place by its shell.

Retrieved from "https://aliens.fandom.com/wiki/Cloaking_Burrow-nit?oldid=151606"
Community content is available under CC-BY-SA unless otherwise noted.