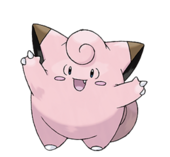 Clefairy (Pippi in Japanese, Piepi in German and Melofee in French) is a Pokémon from the moon which came to the Pokémon world in a strange vehicle. It evolves from Cleffa and evolves to Clefable when given a moon stone. Clefairy appears to be a pink creature. It has stocky limbs and a round body which gives it a chubby appearance. It also possess large sensitive ears that have brown tips. It has small wings that seem incapable of flight, but allow it to bounce gracefully. Clefairy are very shy and timid creatures, and thus rarely show themselves to humans. Clefairy also seem to have gained a reputation as kleptomaniacs, since there have been various reports of Clefairy being seen stealing random junk.

Retrieved from "https://aliens.fandom.com/wiki/Clefairy?oldid=188093"
Community content is available under CC-BY-SA unless otherwise noted.