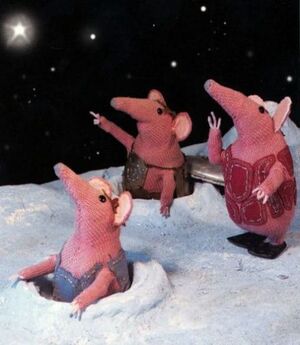 Clangers
The Clangers are small creatures living in peace and harmony on – and inside – a small, hollow planet, far, far away, nourished by Blue String Pudding, and Green Soup harvested from the planet's volcanic soup wells by the Soup Dragon. The word "Clanger" is said to derive from the sound made by opening the metal cover of one of the creatures' crater-like burrows, each of which is covered with a door made from an old metal dustbin lid, to protect against meteorite impacts.

In each episode, there would be some problem to solve, something invented or discovered, or perhaps some new visitor to meet. Music Trees, with note-shaped fruit, grew on the planet's surface, and music would often be an integral feature in the simple but amusing plots. In the "Fishing" episode, one of the Cheese Trees provided a cylindrical five-line staff for notes taken from the Music Trees.

Postgate provided the narration, for the most part in a soft, melodic voice, describing and accounting for the curious antics of the little blue planet's knitted pink inhabitants, and providing a "translation", as it were, for much of their whistled dialogue.

The principal characters are the Clangers themselves, the females wearing dresses and the males brass armour:

Retrieved from "https://aliens.fandom.com/wiki/Clanger?oldid=152871"
Community content is available under CC-BY-SA unless otherwise noted.