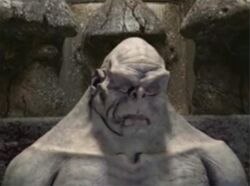 The Clairconctlar are a mysterious race of organisms that evolved based on silicon molecules as opposed to the usual carbon on the planet Enkidu VII. They are as honorable as they are craggy and stone-faced, and they led a deep culture of noble warriors with an ancient heritage. It seems to be customary for them to shroud the full information about their origins in history and mystery from outside races, forcing both the Hegemonic Crux and the New League of Sentient Races to know little about them; not even the Precursor's were able to glean much information off of them, and the one Precursor found suspects that they resemble the ancient and long-thought-extinct Taalo.

Clairconctlar exist in a hive-like culture, with all "living" members having been sired by their queen, of which there appears to be only one in existence. This queen is gargantuan in size, being in effect larger than many moons, and has the appearance of a majestic, blue-gray mountain. Intermittently, the queen will go through a cycle during which she will emit a pale blue egg, known to the Clairconctlar as a Conc Rock. In actuality, this rock is a mass of adamantine flakes, which, under the right circumstances, every flake has equal potential to grow into another Clairconctlar. With the Conc Rock released from their queen, the Clairconctlar will then transport it deep into a cave rich in mineral deposits, although whether only one cave or several exist is unknown. It is here that the rock is capable of flaking off while they leach the geological nutrients from the stone walls around them, ultimately forming embryonic Clairconctlar.

This process is excruciatingly slow in the eyes of a human, and it will take centuries for each flake to gestate, as it must accrete enough matter naturally before it is officially born as a new member of the silicon race. It is not hard to understand why the species hold the Conc Rocks in such high regard, as they are absolutely essential to the continuation of their race.

They are naturally slow in both movement and speech, and as such they will speak in a stately, nearly glacial pace. As one might expect from such a nature as theirs, they are immovably patient, and are extremely slow to anger. Even so, an angered Clairconctlar is no easy match, and they will attack with deadly swiftness.

Clairconctlar are an honor-bound race, and thereby seek equally honorable and just contact with all other species they make contact with. This also leads them to have little patience for brutality as well as the atrocities that mark the galaxy's development. They are fiercely protective of their Conc Rocks, and despite their slowness to anger, they will instantly go on a vengeance hunt against anyone who knowingly destroys one, forsaking all other obligations in an attempt to exterminate the rock-breaker(s). They are valorous in battle, and have built ships known as Pinnacles which launch deadly broadside attacks, only to teleport suddenly out of range of enemy barrages through the use of warp beacons. Once out of danger thanks to their "space buoys", they will recharge their energy reserves to await their next hit-and-run strafe.

Even from the beginning when the Hegemonic Crux first arrived in the Kessari Quadrant, the Clairconctlar resisted their incursions. The conglomerate of "bully races" however saw no way to win their war with the stoic stone warriors, and instead decided (likely through a suggestion made by the Ploxis) to defeat their foes with subterfuge. This was accomplished thanks to the Daktaklakpak's discovery of their unusual reproductive methods, at which point the Ploxis sent in the K'tang Kaktorri to abduct their queen.

The battle between the K'tang and Clairconctlar forces was a bloody one, but eventually the K'tang succeeded in subduing the queen, which they then transported through unspecified means six planets away to Enkidu I, where they used Precursor technologies to affix her to the world's bedrock surface. This was supplemented by recording a phony message telling the queen's subjects that a debt of honor now bound the Clairconctlar to the Ploxis. While the message itself did not divulge the origin of the debt, the Crux created a convenient friction point story if ever the Clairconctlar got too curious: The Crux would claim that the Clairconctlar destroyed most of the Ploxis race in anger, while in truth, the Ploxis had destroyed themselves; however, the rock men wouldn't be privy to this little fact.

With that, the Clairconctlar were recruited into the Hegemonic Crux without further incident. Even while they do the bidding of their superiors, they remain in anguish, as their queen continues to call out to them for salvation, but due to their code of honor, they cannot save her as the Crux has forbidden Clairconctlar visits to the planet she now lay on without their saying why they were not allowed there. And even while the Clairconctlar knew the Crux was an empire without honor of any real sort (outside of the Clairconctlar themselves) they were duty-bound to serve the interstellar bullies until their queen told them that they were free of their debt. With their queen's "message" having been faked all this time, they were stuck in stagnation until the League of Sentient Races discovered a way to free them.

Risking his own life for the Clairconctlar species' own good, the leader of the League smashed a Conc Rock he had personally obtained from their queen to smithereens directly in sight of the view screen, forcing them to lay down all obligations to chase him until they finally slaughtered him. Using this as his primary tactic, he high-tailed it to Enkidu I, where they discovered their queen and the Crux's deception. With this new found information, they immediately severed ties with the Crux and with their reestablished liberty, joined the League out of the same honor that continued to enslave them earlier that same day.