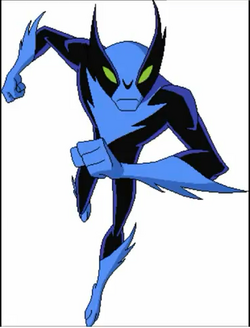 Citrakayahs are black and blue cat-like humanoids with spikes on their glove-like arms and boot-like legs, blue lightning bolt-shaped patterns on their chests, and black mask-like fins around their eyes.

Similar to Kinecelerans, Citrakayahs possess superhuman speed, reflexes, and jumping. They can also accelerate while running, giving them a speed boost.

Citrakayahs are fairly strong, being able to carry Human-sized aliens without losing any speed. Technically speaking, Citrakayahs are physically stronger than Kinecelerans.[2]

The spikes on a Citrakayah's arms and legs can be used as melee weapons.

Similar to Kinecelerans, Citrakayahs have difficulty running on slippery surfaces. Also, if a smart and tactical opponent times their attack correctly, then they will be able to stop a Citrakayah right in their tracks.

Similar to Appoplexians, Citrakayahs can be controlled by a Metahuman with the same powers as Nyancy Chan, though this depends on how prevalent their feline attributes are.[3]

Albedo as Fasttrack
Add a photo to this gallery

Retrieved from "https://aliens.fandom.com/wiki/Citrakayah?oldid=189546"
Community content is available under CC-BY-SA unless otherwise noted.