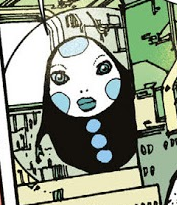 Proteus Vex Universe
The Citheronians are a carnivorous species.

They resemble Matryoshka dolls, however the appearance belies their vicious tendencies, as the top of their heads, when exposed revealed a five-split mouth. A single Citheronian was shown to eviscerate a company of trained mercenaries. The true form of a Citheronian is actually serpentine worm with near invulnerable skin. A healthy Citheronian can consume the equivalent of its body weight in a day.

It was noted that the Citheronians were a fairly primitive race. Due to their aggressive appetites, the Alliance placed their world on a watch list.

Retrieved from "https://aliens.fandom.com/wiki/Citheronian?oldid=161169"
Community content is available under CC-BY-SA unless otherwise noted.