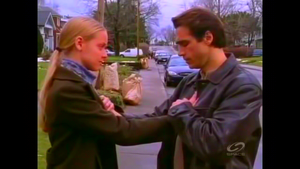 Cirronians are energy-based lifeforms - made of a mix of both positive and negative energies - that inhabit the planet Cirron in the Migar System.

Cirronians have the ability to move at hyperspeed (which weakens them if used more than once in a day), manipulate energy, and have the power of telekinesis as well as hypnosis and healing powers. They are weakened by the cold, in which prolonged exposure could become fatal. Conversely, their strength is increased by heat.

Daggon, also known as Cole, was a member of the Cirronian species who was sent to Earth to deal with the escape of 218 prisoners from SAR TOP; a prison on a moon in the Migar System. When Cole took on a Human form, he showed enhanced speed, strength and agility - being able to scale walls with ease - as well as being a fairly powerful combatant.

Although Cirronians are rather advanced and peaceful, they do still have some criminals in their species. However, most Cirronian criminals are imprisoned for political reasons rather than violent reasons - such as Lontoria. Cole later stated that Cirronians reviled murderers and serial killers, which confused him during his hunt for Suudor, as he found much of humanity seemed to celebrate serial killer's actions.

Cirronians have visited Earth before in the past, according to Cole, and were responsible for many things on Earth that were thought to be impossible - such as building the Pyramids, Stonehenge, the Easter Island Statues, etc. They also interbred with Humans at one point thousands of years in the past in order to 'create bloodlines' - people who would eventually become 'the keepers of a dark secret'. Cole's friend and mentor Mel Porter - later revealed to be a Human/Cirronian hybrid - was the latest in the line of keepers.

Cole explained a fair amount of information about Cirron and his people to Mel, in comparison to what it was like on Earth. Among these topics were how Cirronians got together - with Cole explaining that while Cirronians didn't have the same physical 'signatures' to distinguish male and female like Humans did, he explained that the way they differentiated the opposite sex was due to each Cirronian being composed of a variety of different energy polarities - explaining further that each Cirronian's polarities were a mixture of charges that tended to attract each other. Comparing Cirronian relationships to those on Earth, Cole stated that Cirronian relationships were a lot simpler - with none of the fuss of dating, rejection, meeting the parents or other usual 'rituals' on Earth. Finally, Cole explained to Mel that when two Cirronians come together in a mating ritual, it is an incredibly blissful experience as their polarities meld together for that brief moment - with that moment being one where the Cirronians are one 'united mass of brilliant energy'.

Retrieved from "https://aliens.fandom.com/wiki/Cirronian?oldid=173781"
Community content is available under CC-BY-SA unless otherwise noted.