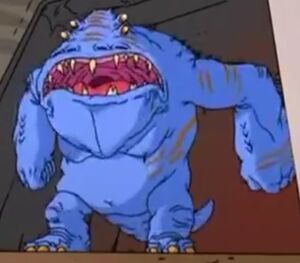 Men in Black
Ciraldians are large, powerful beasts. At least one member of this species was abducted by the Empirians and turned into a gladiator, to entertain the Emperor and his people.

They're tall, muscular blue-skinned bipeds with proportionally long arms, short legs and a short tail. They have a large mouth, four eyes and four nostrils.

Ciraldians don't chew, so it's possible for someone to survive being eaten alive by them, although getting out can be considered an embarrassing experience.

Retrieved from "https://aliens.fandom.com/wiki/Ciraldian?oldid=183462"
Community content is available under CC-BY-SA unless otherwise noted.