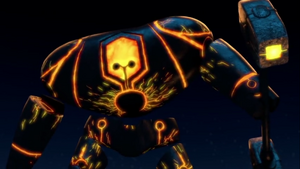 Tales of Arcadia
Cindorites are an alien species native to the volcanic planet Cindor.

Cindorites are beings of hulking mechanized beings with an internal core is composed of magma. Possessing a massive torso with a face embedded in the in the center, and a set of arms and legs that are much smaller in comparison. Cindorites near indestructible with mechanical bodies being impervious to any damage, even by Akiridion serrators are unable to damage a Cindorite's chassis. Possessing great physical strength they are also very agile. Cindorites have only one weakness, water which causes them to cool done and melt.

Cindorites are a violent race known for their wanton disregard for life. They are prone to quips and ruthless cruelty and trash talking.

Retrieved from "https://aliens.fandom.com/wiki/Cindorite?oldid=182580"
Community content is available under CC-BY-SA unless otherwise noted.