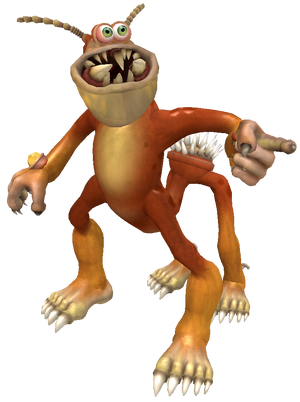 The Ciminerdo is a centauroid that can be encountered within the SPORE Universe.

Ciminerdos are, like other similar creatures of the SPORE Universe, have a bodily anatomy similar to the mythological Centaur: a humanoid upper body attached to a four-legged lower body. This is supported with human-like hands and feet, each with claws on each digit, with "dewclaws" on the back legs, and a rocky protrusion on their wrists.

While most would claim that these creatures are highly aggressive, and many encounters did result in vicious attacks if provoked, the Ciminerdo are also highly curious creatures. Most of these attacks, like most predators, are most likely due to provocation by intruding explorers and studies.

Most individuals are found alone, making it a solitary creature.

Retrieved from "https://aliens.fandom.com/wiki/Ciminerdo?oldid=153710"
Community content is available under CC-BY-SA unless otherwise noted.