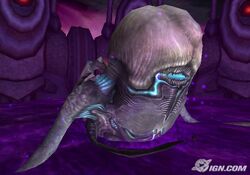 Metroid
Chykka are a species of non-sapient, hermaphroditic arthropoids that appear to be indigenous to Dark Aether's Dark Torvus. They begin life within an coccoon, which eventually hatches into a gargantuan larval stage, typically by the strands holding the coccoon in place decaying to the point of dropping the entire structure into the poisonous waters which seems to facilitate hatching.

These larvae are entirely aquatic by nature, and swim around eating whatever they come across. Because they evolve extremely rapidly into their imago state, they seem to require sustenance at a somewhat shocking rate, and to deal with this they have evolved a long tongue that can be used to ensnare prey on shores, although it is extremely unlikely that such a huge beast would avoid consuming organisms that swim around it in the local waters, as well. Once in the young Chykka's mouth, prey is covered by acidic globs of biomatter in order to quickly break the organism down for digestion. Most of their carapace at this stage is apparently tough and structured well, as it is not susceptible to known missile and other explosive technologies, forcing sapient opponents to take it on with energy beam weapons instead. There is some weak points in their armor plating, however, but these are generally well-hidden and a Chykka larva must generally be temporarily stunned if one is to have any real hope of hitting such a location with weaponry, at which time super missiles are the recommended offensive tool.

When a Chykka finally reaches its adult stage, its gargantuan body will cease to move, which can inadvertently mimic death. Chykka adults (or Chykka imagoes) are tremendously smaller than their previous form, although the reasoning to such a tremendous and sudden change is not well understood. Adults are significantly more intelligent than their larvae, and often fight potential prey items with strafing maneuvers, all the while firing streams of poisoned water that it has picked up to try and disorient or completely incapacitate its foe. It should be noted that Adult Chykka can be stunned in much the same manner as the larval stage, but since their mouths have changed design into more of proboscis than a full-on mouth, one must look for a new weak point; this comes in the form of their wings, as a more clever opponent may suspect. By damaging the wings one can bring a Chykka down to the ground to finish it. However, one must avoid dropping it back into the poisonous waters, as this will facilitate another change, transforming them into a Dark Chykka; presumably they will also do this on their own, likely after producing several new offspring into cocoons, but this is mostly speculation as few Chykka have ever been spotted due to Dark Aether being such a dangerous place to explore.

Dark Chykka are far more resilient than the average adult form, and their wings are no longer defenseless. They are also capable of giving quick birth to yet another form of Chykka known as Chyklings. Likely due to such constant birthing procedures, the egg sac is actually quite sensitive and can be damaged. Chyklings are a miniature flying caste of Chykka which are highly protective of their parent. They will streak out to attack any perceived threats on sight. Because of this, it might be that only a few Adult Chykka would naturally mutate themselves, indicating it as a potential queen caste for the species.