Alien Species
Register
Don't have an account?
Sign In
in: Wildlife, Actual Universe, Aliens on Earth,
and 9 more

The Chupacabra, depicted as an alien creature

Real
The Chupacabra (originally El Chupacabras; which is Spanish for "The Goatsucker") is an elusive predatory cryptid reported to drain its victims entirely of blood. This notorious creature is often spoken about with fear, although it seemingly prefers to run away from humans, rather than attack them. Its most common prey appears to be medium-sized domestic animals such as goats, chickens and sheep, although there have been recounts of it killing cattle and other large animals.

As is the case with most land-based cryptids, the existence of the Chupacabra is usually denied by the mainstream scientific community. Many alleged Chupacabra corpses have been consistently identified by researchers as belonging to some sort of canine (including wolf-coyote hybrids).

Several theories have been proposed about what sort of creature the Chupacabra could be, if real. These theories range from a naturally occurring animal (a new species of carnivore or a giant flightless bat being the most likely candidates); to an extraterrestrial organism that found its way to Earth somehow; or even the awry result of secret genetic experiments from the Cold War.

According to most sources, the first reported sightings of El Chupacabras occurred in Puerto Rico in the mid 1990s. Since then, the creature has been spotted in many other regions across the Americas; from the central parts of the United States down to the mountains of Chile.

In April 2006, it was reported that Chupacabra-like creatures were being spotted in Russia for the first time. If the Chupacabra is a real species and these reports are factual, the most logical explanation would be that it has now become an invasive species, though exactly how it would cross the ocean to get to Russia remains unclear.

The Chupacabra is a particularly awkward case in the cryptozoology field because its appearance tends to diverge greatly with each report. It is most often described as being 1 to 2 meters in height, having a lean body, elongated legs and large glowing eyes. It seems to be a facultative biped (an animal that can change from bipedal to quadrupedal stance) and possesses claws on its paws and sharp fangs in its mouth. The mouth itself might be described as a humanoid mouth, a dog-like snout or even a sucking proboscis. The hind portion of its body is large, giving it a wallaby-like appearance and great jumping abilities.

Among the most common Chupacabra traits is the presence of rows of spikes or quills on its back, the purpose of which is somewhat unclear. Some reports claim it has wings. A particular witness once described it as a kangaroo with a crocodile head. In Puerto Rico's El Yunque National Park, another kind of Chupacabra has been seen. It is described as having the lower body of a kangaroo, the upper body of a primate, crab claws and goat fur.

This species is widely recognized as a jumping animal, which will hop around like a wallaby, as well as move quickly through the trees in some cases. Other reports go one step further by stating that the beast is able to glide like a flying lemur. Some say it can easily jump over a man-made building. In one report, it was said to have jumped 20 feet.

The beast often appears to combine aspects of mammals and reptiles. The description of its skin is particularly inconsistent: it might be described as having partial or complete fur covering; scales covering; smooth skin; feather covering; as well as several types of camouflage. Some claim that the Chupacabra can actually modify the color and texture of its skin, much like an octopus, in order to blend with its surroundings.

Most testimonies also state that it makes high-pitched screeching sounds, and sometimes leaves an awful sulfuric stench behind. Some accounts state that its eyes become glowing red when it screeches; sometimes giving the witnesses nausea.

The Chupacabra is often, if not always, described as an ambush predator, which prefers to rely on surprise than to actively run after its prey. This concurs with the widespread notion of this animal as a camouflaged creature, and one that frequently jumps away when confronted. It is also reported to be very strong, however: able to kill animals much larger than itself with little fighting.

The most notorious aspect, which is almost universally present across all Chupacabra stories, is the fact that it drains its victims out of their whole blood, leaving nothing but a dry carcass with two or three small incisions.

Although most authorities nowadays believe the Chupacabra to be nothing but a contemporary legend, countless theories have been proposed about its possible identities. If real, the Chupacabra almost certainly represents a new species of animal, although what kind of animal it is remains up for discussion.

The most likely theories are that it is either a carnivoran (such as a canid or a felid) or a large flightless (or nearly flightless) bat, although other possibilities, such as marsupial and primate can't be completely ruled out. The bat theory is perhaps the most interesting, because the classic Chupacabra actually fits it pretty well. Its long slender limbs and hopping/gliding abilities coincide with what you would expect from a predator which evolved from flying ancestors. The existence of vampire bats (the only purely hematophagous mammals in the world), which inhabit South America, also gives credit to this idea. One must keep in mind that there are fossils of prehistoric vampire bats much larger than the modern kind (albeit not as large as a Chupacabra) and that the vampire bats are, with the exception of some New Zealand species, the most terrestrial kinds of bat, and thus are likely candidates to give rise to a new flightless species. Of course, the biggest problem with such theories would be the relative unlikeliness of a large terrestrial bat species going undiscovered by scientists, even in the Central American rainforests, where new species of (usually small) animals are still being discovered every day.

In the past years, several odd-looking canine-like animals have been shot down by North American farmers, who claimed they had just killed a Chupacabra. After being studied by authorities, in nearly all cases, the analysis has shown that the animals referred to as Chupacabras by the local communities were more often than not regular canids (usually coyotes or foxes) suffering from severe skin diseases and internal parasites (which accounts for their skinny appearance). The fact that these creatures are ill and weak could even explain their preference for attacking farm animals (a relatively easy prey) rather that wild ones. In at least one of these cases, the animal was identified as a coyote-wolf hybrid.

An interesting fact pointed out by some theorists is that the science fiction horror movie Species features a creature remarkably similar to the Chupacabra. The movie was released in 1995, and the first modern sightings of the animal began to spread shortly afterwards. According to some researchers, it is possible that the movie monster became the source of hallucinations and/or hoaxes which actually spawned the legend of a vampire beast. Others still claim that Chupacabra stories are actually much older than the movie, with some reports dating back to the 1970s and a similar entity called the Maboya existing in the natives' mythology since historical times. 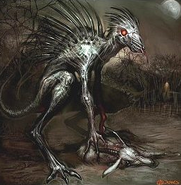 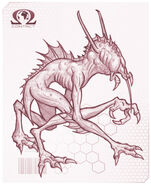 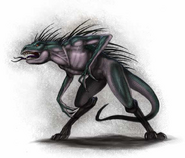 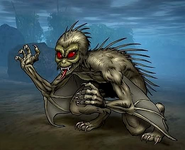