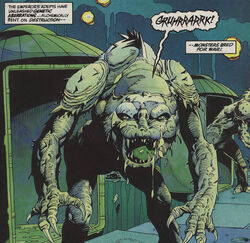 The chrysalide, also known as the "chrysalis beast", are a type of rancor altered by Sith Alchemy. Their teeth can chew through metal.

Emperor Palpatine kept some as pets at the Imperial Citadel on Byss around 10 years after the Battle of Yavin. X-1 Viper droids which were controlled by New Republic commandos attacked the Imperial forces and had them defeated until the chrysalides were released on the droids. The chrysalides' teeth could chew through Vipers' armor, thereby turning the battle in the Empire's favor and causing the surviving New Republic personnel to retreat.

It is not known what happened to them afterwards.