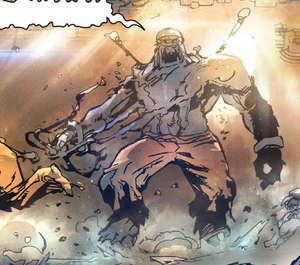 Grey Area
The Choodey Bandrall are an alien species native to a planet near Homeworld.

Choodey Bandrall are big strapping grey skinned bipeds with feature arthropod-like mandibles. On their backs they possess two long feelers emerging on their backs. They appear to be carnivores.

When Adam Bulliet and his ETC team arrived on Homeworld they got the remaining Choodey Bandrall on their side when the revealed that another God-Star was coming to the planet. The Choodey Bandrall learning that the humans actually killed on decided to join forces and regain their honor.

When the team returned to Grey Area, the Angels like vermin sought new sources of food and attacked the facility. The Choodey Bandrall then joined the Harmonious Free and the other races of Grey Area in its defense. After the group succeeded one of the Choodey Bandrall offered to commensurate a wedding for Bulliet and Birdy.

However with the human of a human empath and the Elite of the Harmonious Free they managed to fool the God-Star in thinking the planet was another of its kind forcing it to flee from the psychic illusion. Later after the Congruence received the distress call from the planet and eliminated the creature the Choodey Bandrall were them relocated.

The Choodey Bandrall are a warrior race. They are holy warriors, worshiping Almighty Gorg, and their lives are devoted to his adoration which essentially involves acts of violence.

Retrieved from "https://aliens.fandom.com/wiki/Choodey_Bandrall?oldid=169478"
Community content is available under CC-BY-SA unless otherwise noted.