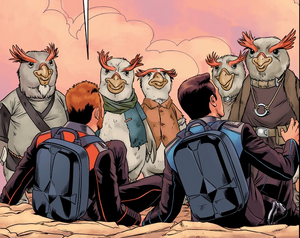 The Orville
The Chogs are an aliens species that lived in the vicinity of a Magnetar star.

Chogs are a short avian species resembling tan rockhopper penguins. They are a long lived species one being able to reach the ripe age of 107 years.

A hundred years ago the Planetary Union battleship the USS Burton crashed on an unnamed planet during the war with the Tzel. The crash damaged the quantum reactor, causing it to leak and poison the biosphere. Most of the plant and animal life began to die, the Chogs finding the crashed ship came to aid the surviving crew. Navigator Hodges, the senior officer, was touched by the aliens' selflessness. The creatures had wished to help the visitors from the stars unknown to the fact that they had been directly responsible for their possible extinction. In his guilt Hodges tried to make amends by repairing the Burton making sure it supplied power to the food synthesizer to provide the Chogs food. In addition the particle cannon was repaired to protect their world.

Over the years the Chogs congregated their society around the Burton calling it the Food Place. It was their provider and protector and their lives were centered around it. Those who remembered the world that was told the younger generations stories of the past.

The USS Orville picked up the distress signal and Captain Mercer and Gordon sent a shuttle to investigate. The Burton detecting their approach shot the shuttle down but the two survived the crash. Finding the friendly Chogs, who numbered to 500, they were brought to the Food Place. Though the two were told not to delve deeper into the ship, the Union officers sneaked in the night to learn more of how the Burton crashed. Finding a recorded message from Hodges the two understood the truth. Upon exiting the ship the Chogs apprehended them accusing them of desecrating the sacred place. Mercer managed to explain that the vessel belonged to his people, and appealed to known who told them their past. The younger Chogs then directed them to the last surviving elder from a hundred years ago. The aged Chog barely remembered the events what transpired but upon hearing Mercer's words considered his words.

The Chogs were convinced and Mercer and Gordon were freed in time to prevent the USS Orville from striking the Burton from orbit after it was fired upon. Three days later the Union sent USS Ulysses to help transplant the Chogs to a more friendly world. During this time their planet would be terraformed for three years to restore its biosphere.

Chogs appear to be fairly peaceful, though live in a primitive state due to some calamity that be-felled their world turning it into a desert. What is left of the civilization eke out an crude existence around the USS Burton, a Planetary Union vessel that crashed over a hundred years ago.

Retrieved from "https://aliens.fandom.com/wiki/Chog?oldid=185605"
Community content is available under CC-BY-SA unless otherwise noted.