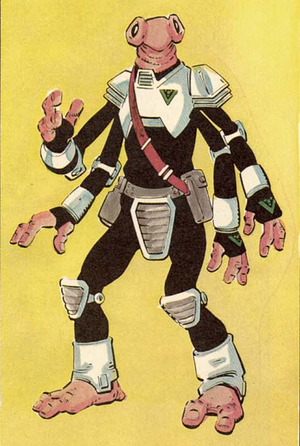 Alien Legion
The Cho-Ad are an alien species from the planet Cho-Ad of the Polara System of the Auron Galaxy.

Cho-Ad are a bipedal species with four arms, each ending in three fingers. Males possess minor esper abilities in the form of telepathy.

The planet Cho-Ad suffered an ecological catastrophe forcing many Cho-Ads to flee their world.

Retrieved from "https://aliens.fandom.com/wiki/Cho-Ad?oldid=173778"
Community content is available under CC-BY-SA unless otherwise noted.