Alien Species
Register
Don't have an account?
Sign In
Advertisement
in: Earth Inhabitants, Races of the Sol System, Sapient Beings,
and 18 more 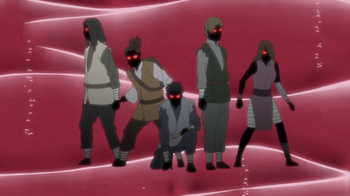 The Chinoike, also known as the Chinoike Clan, are human beings from the Naruto universe who, through some genetic mutation, have been able to use a skill called Ketsuryugan.

Shortly before the formation of villages, the Chinoike Clan settled in Kumogakure and became very popular around the world for their incredible skills, however, one day a woman from the Chinoike clan was arranged to marry the daimyo from the Land of Lightning, but the original wife of the daimyo was jealous. A while later, the daimyo mysteriously died of an illness, and his wife placed all the blame on the Chinoike clan's wife, saying that the entire clan deceived the daimyo into a coup, causing the Lightning Country to hire another clan with special abilities called Uchiha to hunt the whole Chinoike clan, leaving apparently only two living individuals, En and his daughter Chino.

Overall, the Chinoike Clan is exactly like humans (homo sapiens), with the only difference being the Ketsuryugan and the blood handling ability.

The skills of the Chinoike boil down to their Ketsuryugan, this ability changes their eyes, making the sclera of the eye that was once white turn red as blood, the iris turns black and the pupil widens, looking like a frog and takes on a color purple. With this eye they are able to use a number of different skills, including expanding someone's body by manipulating blood, manipulating the blood in the body of targets to turn them into bombs and blowing them up whenever they want, drawing blood from victims and shape as you wish, like a eight-headed dragon for example, and finally, trap people in an illusion so potent that only the possessors of other eyes, the Uchiha who owns the Sharingan could fight them.

The Chinoikes are practically extinct, however, when they were still abundant in their homeland, they were very famous and respected by their eyes and an extremely influential clan.