Chimera Sui Generis, also known as Chimerans or Vilgaxians, are a species from the planet Vilgaxia.

Chimeras have incredible natural strength, agility, and durability. They can project powerful laser beams from their eyes, though only Vilgax and his genetic copy Gax have displayed this ability.

Chimeras have the ability to transform into large octopus-like creatures at will, though it would likely be useful only in water-based environments. They also have shapeshifting arms that can transform into powerful tentacles.

Chimerans are possibly quite intelligent, as Myaxx was one of Azmuth's assistants and helped him make the Omnitrix and the cloaking field for Xenon. Meanwhile, Vilgax displays high levels of expertise with the Omnitrix as well as having a vast army of drones that he may have made himself.

According to Rouleau, Chimerans can to speak to and through his DNA, which was allowed Vilgax to talk to Upgrade when he was merged with Rojo.

According to Dwayne McDuffie and Duncan Rouleau, the Omnitrix from the original Ben 10 continuity contains a Chimera Sui Generis DNA and its genetic donor is none other than Vilgax. However, Rouleau says, Ben was unable to discover this form because the power surge on the Chimerian Hammer removed the DNA sample from the Omnitrix during the original series episode "Secrets". McDuffie has also stated that the Ultimatrix did not contain Chimeran Sui Generis DNA. 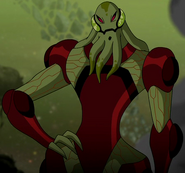 Vilgax after receiving his implants

Chimeran civilians
Add a photo to this gallery

Retrieved from "https://aliens.fandom.com/wiki/Chimera_Sui_Generis?oldid=159600"
Community content is available under CC-BY-SA unless otherwise noted.