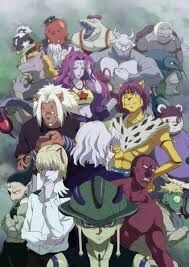 Bipedal (after consumption of human DNA)

Omnivore (after consumption of human DNA)

Sapient (after consumption of human DNA)

After consuming several types of meat, the queen separates the DNA from the food and includes it in an embryo, after which he lays the egg with the modified embryo, from which a hybrid being came out (previously)

Same as before, with the inclusion of sexual reproduction (after consumption of human DNA)

Phagogenesis; fuse the DNA consumed in an embryo

The Chimera Ants are a sapient species from the Hunter x Hunter anime and manga (pronounced only as Hunter Hunter), they emerged in a place called the Dark Continent and for some reason, a super developed queen (probably there was already human DNA included in it), it is taken to NGL by the sea, and a colony starts there to try a world domination plan to become the dominant species.

The outer appearance of a chimera ant is extremely varied, depending on the DNA that was included in its composition, but at the beginning they were extremely similar, looking like common ants only a few inches larger, to the point that they could be blown up by a firing from a firearm.

Chimera Ants are extremely curious beings never seen before and not similar to anything already shown in the series as in others, they can perform a process called phagogenesis, which is when a chimera queen eats an animal brought by its workers, the animal's DNA consumed will be separated from the meat and included in the embryo of an upcoming chimera ant. In this way Chimera Ants evolved very fast in the world, being able to skip the millennia of study and development that humans had with a simple meal. The queen as well as other ants can lay several eggs in just one day, with just one meal she can lay five ant eggs with different characteristics and the bigger and stronger or more complex the species consumed, the stronger and more vigorous the ant created in such a way, several species were extinguished by the Chimera Ants, who aimed to create the best soldiers for their colony, so humans are considered the best terrestrial meal of ants, since they are at the top of the food chain and have wisdom. Another fact about Chimera Ants is that sometimes they can survive up to 24 hours with their heads out of the body and like any living thing, Chimera Ants need to breathe, although the way they breathe varies according to the species included in their DNA, and may be killed if their internal organs are destroyed. The chimera queen who accidentally arrived on the Dark Continent, communicated telepathically in Japanese language, it is unknown if ants that do not acquire sapience communicate in the same way, as they evolved, chimera soldiers managed to use both speech and telepathy, while the more recently generated as the royal guards and the king could only communicate through human speech, this is because chimera ants who were born with human genes can remember some events from their past life. Chimera Ants who were born to a queen have no childhood and rarely look like children, they hatch in adult form after hatching.

Chimera Ants has a hierarchical system similar to that of common ants, they have a queen, the one who lays eggs from where all the other Chimera Ants hatch, usually the queen lays her eggs on the roof of her house, where in the hierarchy the king or the queen, below the royal guards who do exactly what their name says, then the squad leaders, the officers and finally the pawns. Starting with the queen, as said above she who gives birth to all types of Chimera Ants from her colony, when she eats a certain number of pounds of meat and stores DNA, she becomes pregnant with the king instead of laying an egg from where he would be born, and after a few days of gestation, the king is born killing his queen and all the ants below him begin to lead him, after a period the king impregnates some female ant that gives birth to another queen, and so the process continues... The royal guards are usually three and are the strongest ants just below the king, their role is to protect their queen from any and all danger, but when she dies, they automatically start protecting the newborn king. Squad leaders have authority over a group of officers, who in turn command a pedestrian squad. The lower your strength in the colony, the lower you will be in the hierarchy, this changed when the human DNA started to be implemented by the ants, causing the ants to start to be independent beings as humans are, no longer being controlled by queen and fleeing her colony to live their own lives, doing whatever they want and generally hunting humans as they are still delicious to them, the only ones who remained loyal after the king's birth were the royal guards. Chimera Ants exterminate humans, sometimes just for fun, as they are superior to them because they have much more skills thanks to the countless species infused in their genes, however, most of them were exterminated by the Hunters, leaving only a few hidden and others who decided to ally humanity.

Chimera Ants did not develop technology, not least because they did not have so much time for that, however, they developed writing and speaking very fast, and even with the technology being practically null they managed to be superior to humans thanks to their abilities of various species and their extremely powerful nen.