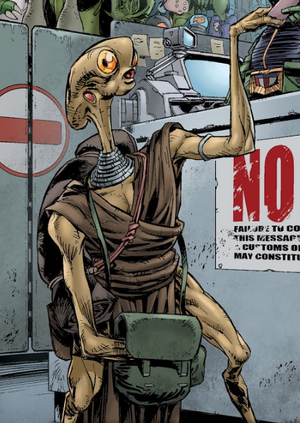 Judge Dredd
The Children of Keeb are an alien race from the Garden of All-Mother Hweega.

Small thin brown skinned aliens with digitigrade legs. They also seem to possess the ability to phase through objects, though only their physical body and not their attire. Even after death, their skulls are psychically active and retain all their personalities. Some gifted are able to control plant-life and even change organic matter.

Qgggl, Fourth of the Third Tribe of the Children of Keeb came to Mega-City One using the entire wealth of his tribe in order to retrieve his grandfather's remains. Obtaining a 24-hour visa he managed to make his way to the location of his relative's remains, passing the harsh world of humanity dystopia. The remains as it turned out were located in an Museum of Alien Anthropology, where several stuffed alien bodies were displayed. The curator of the museum was skeptical of Qgggl claims that his relative's remains were in the museum. When the xenophobic humans used bureaucratic red-tape to obstruct the peaceful alien as the process would require ten to twelve days, exceeding Qggl's visa permit. Having exhausted all his funds, Qgggl tried to locate the remains himself, only for the curator called Judge Dredd about a amok alien. The Judge subdued the alien and chained him to a pole, accept the curator's falsified report of why Qgggl went irate. Having enough of the violent treatment Qgggl phased through his bounds and swore retribution on humanity.

Returning to the museum, he attempted to attack the curators, however paused when he heard the 'mental voice' of his grandfather, whose skull was being desecrated by the humans who plead him not to kill. He was discovered but managed to use his abilities to stun the humans, but an alert had already gone out to the Judges. From his grandfather's mental communication Qgggl learned of others skulls of various aliens in the possession of a human collector. Dredd having arrived on the scene soon learned his error as the curators falsified a report and was selling alien artifacts that should have been returned to the original families. However Qgggl actions only warrant the human to arrest the alien. Qgggl though had found the other skulls in a vault of the human collector and his associate. He used his powers to transform them into a tree. The skulls and Qgggl were pursued by Dredd and his Judges. Knowing full well that now that the humans knew what their kind could do, his grandfather warned that the Children of Keeb would never be left alone. Qgggl though planned for this and immediately allowed a cannon shot to target him and the skulls. Dredd and the others believed he had perished, strangely all information of his species and planet were erased from the records. Qgggl and his relics were seen safely in the cargo hold of a ship.

The aliens are said to be relative peaceful. They had contact with humanity recorded in to Scroll of Woe in which humanity was the aggressor and mistook several of their species as non-sentient.

Retrieved from "https://aliens.fandom.com/wiki/Children_of_Keeb?oldid=173777"
Community content is available under CC-BY-SA unless otherwise noted.