Alien Species
Register
Don't have an account?
Sign In
Advertisement
in: Space: Above & Beyond Universe, Sapient Species, Helios IV Inhabitants,
and 10 more 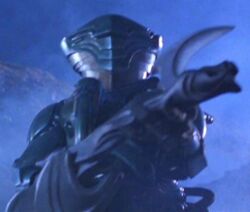 Space: Above & Beyond
The Chig is the derogatory nickname given by Terrans to a race that suddenly attacked the first two colonies of Earth presumably unprovoked, setting the beginning of a year long war between the two races.

The Chig race evolved on a world due to panspermia, and find both oxygen and water extremely toxic to them. While water simply makes them bleed profusely and die in a seizure, contact with oxygenated atmospheres actually immediately disintegrates their bodies. Instead, Chig breathe a methane-rich atmosphere native to their homeworld.

Much about the Chigs' society and culture remains unknown, and their specific command hierarchy and general social structures remain unexplained. From the Chig ambassador's claims, it seems that they consider the moon they evolved on (codenamed "Anvil" by Humans) to be "sacred" in some sense.

One curious practice observed since early in the war with humanity was that whenever Chig infantry encountered the grave of a dead Human soldier, they would dig up the body and mutilate the corpse, typically by completely dismembering it. At first, the Human military thought this was a terror-tactic, meant to frighten Human soldiers with the Chigs' brutality. As the war progressed, it was eventually discovered that while the Chigs may possess some form of "religion" (given that they consider their breeding grounds to be sacred), they never developed a concept of an afterlife. As it turns out, Humans are just as much mysterious, terrifying aliens to the Chigs as they are to Humans. As the Chigs encountered snippets of Human culture, through intercepted radio transmissions or recovered personal effects from dead soldiers, etc., they drastically misinterpreted this alien concept of an "afterlife". This led the Chigs to believe that dead Human soldiers will literally spring back to life sometime after their death, and that burying a corpse aids this process. Genuinely terrified of this Human "army of zombies", Chig infantry then began to dig up the graves of Human soldiers they came across and completely dismember their corpses, to make sure they stay dead.

Just as Humans have applied the derogatory slang-nickname "Chigs" to the aliens, they have their own derogatory slang term for Humans. According to their Silicate allies, the term loosely translates as "Red Stink Creature". Chigs have green instead of red blood, and smell like sulfur. As it turns out, Humans' red blood and non-sulfur smell strikes the Chigs as just as disturbingly "unnatural" as their alien biology seems to us.

Chig technology is bio-organically based, and ships are in fact living organisms which use the body currents of their crews to successfully be piloted. The Chig have developed faster-than-light spacefaring travel, with some of their ships even being capable of flying through the wash of a black hole by skipping across it, whereas Human ships will just get sucked in and crushed into a singularity.

Known Human first contact with the Chigs began when an unmanned probe, launched by the military-industrial corporation Aerotech, landed on a celestial body designated "celestial body 2064K" (later given military designation 'Anvil'), the single moon orbiting the Chig homeworld. This moon is sacred to the Chigs because it is where life originated via panspermia and where Chigs still go to be born. The Chigs actually evolved from bacteria that originated on Earth billions of years ago: an asteroid collision threw these bacteria into space, carried by meteorites, where they eventually landed on the Chig sacred moon. Life on Earth had already advanced to the eukaryote stage of development, and the rate of evolution proceeded slightly faster for the bacteria on their new world, allowing life there to evolve to the point that it could produce the sapient Chigs at roughly the same time that modern Humans evolved.

The Aerotech probe managed to obtain a limited amount of data before the Chigs send a warning signal through it before destroying the probe. Aerotech, for unknown reasons, apparently chooses to keep this "first contact" a secret from the governments of Earth.

In early 2063, Chigs declared war on humanity, due to Aerotech's incursion, launching what appears to be an unprovoked first-strike against humanity's budding interstellar colonies. These colonists, sponsored by Aerotech and designated the Vespa and Tellus colonies, are attacked and destroyed and the few survivors are taken prisoner. The Chig space forces begin a push straight towards Earth, devastating the unprepared Earth forces. Only the actions of the US Marines Aviator 58th Squadron at the Battle of the Belt prevent Earth itself from falling (the battle was actually fought in the Trojan asteroid field at Jupiter's Lagrangian point, not the main asteroid belt).

Through the element of surprise, superior numbers, and their advanced technology, the Chigs gain the advantage in early battles. Humanity's adaptability and ferocity catches them off guard. The Chigs, who favor large direct military strategies, are unprepared for the guerrilla tactics used by the Human forces. Special operations missions, infiltrations, assassinations, sabotage, and small unit engagements all prove effective against the Chig attackers.

The Chigs then enter into an alliance with the remnants of the Silicates, a Human-built race of androids, that fled to space after losing the AI Wars on Earth. The exact nature of this alliance is vague and not known in detail. Just as Humans are ready to conquer the Chig homeworld, though, an emissary comes to negotiate for peaceful relations. However peaceful negotiations deteriorate after the Aerotech denies all allegations of the "first contact", and started accusing the ambassador and blasting threats, prompting the alien dignitary to attack and die, killing the Aerotech rep. Before dying, the emissary reveals that Humans and Chigs seem to have a common origin, based on their chemical makeup.