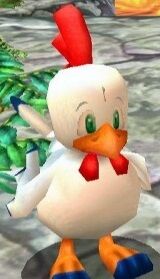 Billy Hatcher and the Giant Egg
Chickens are a flightless avian race found within Morning Land, and the dominating lifeform of the World of the Chickens.

Physically, Chickens seem to mirror their Earth counterparts, similar to the Crows. They have white feathers, with a red crest on top of their heads, similar to a rooster. Juveniles look very similar to Chicks.

Though Chickens do wear clothing, they don't possess a more humanoid form as do the Crows.

Chickens as a whole are a peaceful race, and aren't good at fighting.

Chicken society is ruled by what is called a Chicken Elder, who are the leaders over various regions of Morning Land. They are in charge of bringing morning to the World of the Chickens with a hearty "cock-a-doodle-do". Failure to do so will result in pitting their world into complete darkness.

Retrieved from "https://aliens.fandom.com/wiki/Chicken_(Billy_Hatcher_and_the_Giant_Egg)?oldid=176228"
Community content is available under CC-BY-SA unless otherwise noted.