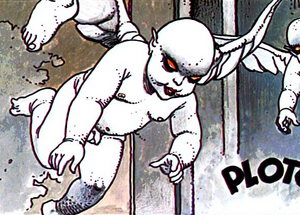 The Cherubs are alien creatures native to the colony world of Dipha.

Found on the world of Dipha, the Cherubs were later imported to Earth. In 2023, the corrupt Pope Theodore kept them around his person to fool that masses of the dystopia city-state of Paris that he was a holy messenger. Ironically they caused his death, when they turned off his levitator.

While seemingly animal-like, the Cherubs appear to be more intelligent than previously realized, speaking in their own language in hush tones, unbeknowest their humans owners.

Retrieved from "https://aliens.fandom.com/wiki/Cherub_(Nikopol_Trilogy)?oldid=181727"
Community content is available under CC-BY-SA unless otherwise noted.