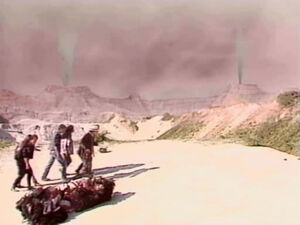 Doctor Who
The Cheetah Planet is an example of a living world: a planet that is actually a living entity. It is inhabited by the savage Cheetah People and the carrion-eating Kitlings; both of which have the ability to teleport to other worlds in search of food.

This planet actually exerts a strange influence over its inhabitants, transforming visitors from other species into Cheetah People and mentally linking their minds to it. The planet's environment is suitable for Humans. Its sky has a reddish coloration and at least one moon.

The Cheetah Planet is intrinsically linked to the Cheetah People, which feel a deep connection to it. The savage fights among the Cheetah People result in tremors, fissures and explosions manifesting on the planet's terrain, to the point that it was eventually obliterated by this destructive activity.

The Cheetah Planet was once inhabited by a civilization that bred the Kitlings as scouts by linking their minds to them and seeing through their eyes. According to a rogue Time Lord known as the Master, these people believed they could tame the planet, but actually fell victim to its influence instead and descended further into savagery, becoming Cheetah People as a result.

Retrieved from "https://aliens.fandom.com/wiki/Cheetah_Planet?oldid=176634"
Community content is available under CC-BY-SA unless otherwise noted.