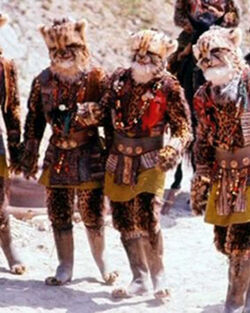 Other species transformed by the influence of their planet

The Cheetah People are a species of sapient, savage humanoids that inhabit an unnamed planet which is actually alive and connected to them. They're known for their ability to teleport to other worlds to hunt, and the creatures hunted by them are transported to the Cheetahs' own planet, where those who survive will slowly be transformed into Cheetah People as well.

They were likely rendered extinct following the destruction of their homeworld; although given their teleportation abilities, it's possible that some have survived.

The Cheetah People are intelligent carnivores which physically resemble furry bipedal felines. They're capable of speech, even though they seem to rarely communicate with others (possibly due to their mental links). They can see in the dark and have eyes that glow, like those of Earth felines. They also have retractable claws, sharp fangs and a keen sense of smell.

Members of other species who find themselves being transformed into Cheetah People will initially develop fangs and glowing eyes; followed by the ability to teleport to other worlds. They will feel a deep connection to the Cheetahs' planet and a lust for the hunt. Cheetah People who die away from the Cheetah Planet revert to their original forms upon death. It's not known if the same is true for those who die on the planet.

Members of this species have a symbiotic mental link with the scavenging Kitlings, which teleport to other worlds to locate potential prey to the Cheetah People, and get to feed off the scraps.

The Cheetah People are a race of savage hunters who travel to other worlds without spaceships by making use of their natural teleporting abilities. They don't seem to use much in the way of technology, although they wear clothes and ride horses.

According to the Doctor, the reason no one knows much about the Cheetah People is that people "don't survive long enough to find anything out".

Retrieved from "https://aliens.fandom.com/wiki/Cheetah_Person?oldid=176630"
Community content is available under CC-BY-SA unless otherwise noted.