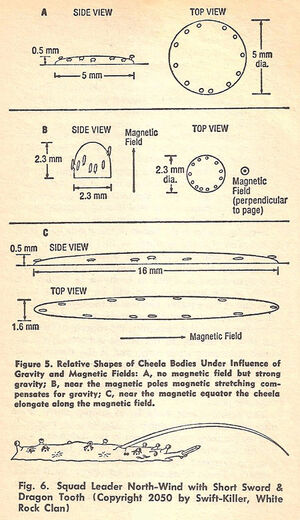 Robert L. Forward
The Cheela are a sapient species of lifeforms which inhabit the surface of a rogue pulsar (neutron star) named Dragon's Egg, which was passing close to the Sol System in the mid 21st century. Flattened by the extreme gravity of their world, they are amorphous organisms with a dozen eyes and crystal-based bones which can grow, dissolve and re-grow at will.

Their bodies are based on nuclear composts and their whole metabolism consists of nuclear, rather than chemical, reactions, moving neutrons around like planetary dwelling life ordinarily moves electrons; with the same being true for all other living things in their environment as well. This has the consequence of accelerating the Cheela metabolism to the point that they experience time literally a million times faster than Humans. For a Cheela, a second is a long period akin to a week; a lifespan can be measured in minutes; and several generations pass in a single Earth day.

Following Human first contact in 2050, it took them less than a week to develop from superstitious barbarians into a highly advanced society capable of building their first starships equipped with mini-black holes to generate the gravitational pull needed to keep their bodies and surroundings intact. After this they went on to explore the nearby stars and pulsars, leaving planetary bodies to their galactic neighbors and friends who had observed them and taught them much since the Cheela dawn of time.

The Cheela's homeworld of Dragon's Egg is a neutron star with a crystalline crust of neutron-rich atoms (especially iron isotopes) and a five-centimeter thick atmosphere of iron vapor. The world is about half the mass of Sol, but only 20 km in diameter. The surface gravity is about 67 billion Gs. The Cheela measure time in "turns", the rotation period of Egg, which is roughly one fifth of a second long.

Technically, all animal-analogue life on Dragon's Egg, including the Cheela, actually descend from mobile vegetation (or the nuclear-based life equivalent of such at least). Their world is covered in rich canopies of trees which, although less than a millimeter high, derive metabolic energy from the influx of heat running from their roots to treetops, caused by the drastic difference in temperature between the former and the latter. These plants are held upright by a backbone of crystalline nuclei, which renders them sessile. The ancestors of the Cheela had a mutated enzyme which allowed them to dissolve their skeleton at will and recreate it if they wish to, at any part of their bodies, thus becoming mobile and versatile.

The Cheela are anatomically simple creatures, with an amorphous body from which they can extend and retract appendages and crystal bones at will. They regularly create tendrils and pseudopods for manipulating objects, and body pouches to carry them. The only permanent structures are their twelve, regularly-spaced red eyes, which can also be stretched in eyestalks for them to see beyond their extremely short body height. These eyes are able to detect electromagnetic waves from the ultraviolet spectrum and well into the X-ray spectrum, in a way that when staring at a Human body they can see superimposed images of the skeleton system, flesh and skin and clothes.

Besides eyes, they also have sonar-based sensory organs, and are also able to detect magnetic and Coriolis field lines, which give them their high sense of direction. However their primary means of communication is by producing directed vibrations on the ground, which can be used for long distance communication as much as short distance. They have a brain nodule, which is their most vulnerable area, and can be moved to anywhere on the body, usually kept the further away possible from danger.

The average member of the species has a flat elliptical body about five millimeters in diameter and half a millimeter high. However, in that minuscule body they have roughly the same number of atomic nuclei as a Human being, and therefore weight about the same – 70 kg. Like the Mesklinites, they are characterized by a pathological aversion to heights. The genetic material of a Cheela is guarded in a triply redundant structure, and made such as to prevent excessive mutations in the offspring.

The entire lifespan of a Cheela is less than an hour. The first six minutes are spent as a hatchling, followed by about six as a young apprentice, fifteen as a worker, fifteen as a caretaker of hatchlings (Old One), and the remaining time as an Aged One.

Under some circumstances (following starvation and extreme physical injuries) the Cheela body is capable of entering a comatose-like stage, temporarily reverting to its old vegetable form and metabolism for several minutes (the rough Cheela equivalent to some decades) until forming a new adequate food reserve and reverting to their original form with memories intact. This vegetable regression is the only known condition in which the Cheela metabolism comes close to what the Humans refer to as sleep.

Both male and female Cheela can exert any of many possible functions within a community: agriculture, military, religious, political, scientific or combinations of those. They are a polygamous species and the elder are assigned to take communal care of the eggs and raise the hatchlings until adulthood. They are organized in clans which, throughout Cheela history can be seen as developing from simple hunter-gathering tribes to technological countries. Their mathematics was developed using base 12, the number of eyes a Cheela has.

After their first contact in 2050, there have been attempts to reorganize Cheela society to be more like the Human ones, with a hereditary form of government; but the system was deemed unnatural for the clan-based mentality of the species and soon abandoned.

Retrieved from "https://aliens.fandom.com/wiki/Cheela?oldid=187253"
Community content is available under CC-BY-SA unless otherwise noted.