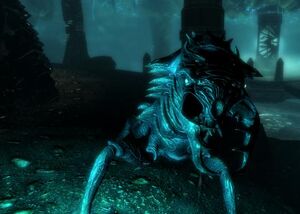 The Elder Scrolls
Chaurus are large carnivorous bugs found underground, mostly in the Skyrim regions. They have been tamed by the Falmer and are used for their meat and Chitin shell.

If engaged in combat, they will either use their pincers, or spit a toxic venom at their target.

Their diet seems to be predator based, eating what they kill. Pens made by the Falmer to contain the Chaurus contain the bones of their victims, giving credibility to the belief that captured victims are used as food.

Retrieved from "https://aliens.fandom.com/wiki/Chaurus?oldid=168138"
Community content is available under CC-BY-SA unless otherwise noted.