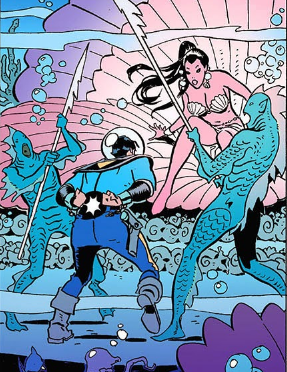 The Charybdis are an underwater race of amphibians native to Tantalus.

During his younger years Captain Duke McQueen fought against the Charybdis. Forty years later, after Duke returned to Tantalus to free the Tantalans from the Broteans, he fell into the Sea of Karkinos whilst escaping the Brotean raiding party that had captured the entire Resistance.

The Brotean soldiers assumed him to be dead after the ravenous Charybdis dragged him beneath the waves. Duke managed to escape their grasp killing several before making his way back to his friends.

They are an aggressive race, with even the Brotean soldiers staying away from them due to their ravenous hunger. They sometimes linger by the coast waiting for unsuspecting locals so they may drag them down into the depths.

Retrieved from "https://aliens.fandom.com/wiki/Charybdis?oldid=174835"
Community content is available under CC-BY-SA unless otherwise noted.