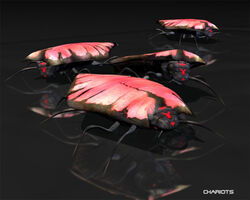 Arkellian Sand Beetle, or Chariot Bug, is a low-ranking species of the Arachnids, known as Worker Bugs. Eight of them are used to carry a Brain Bug due to its large size. Prior to the Arachnid War, it was believed that the Arkellian Sand Beetle was a separate species and not of the Arachnid race. High Schools often used dead beetles for dissection purposes. It was not until the Klendathu System Campaign that Arkellian Sand Beetles were found amongst Arachnid colonies. Whilst diesecting one of them in school one of Rico's teachers states that this beetle is superior in many ways to humans because: it reproduces in vast numbers, has no ego nor fear, doesn't know about death, and is a selfless member of society.