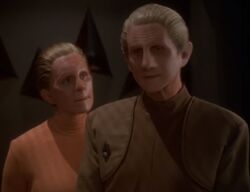 Able to live in virtually any habitat

Star Trek
The Changelings are a sapient amorphous race with outstanding shapeshifting abilities. They are a very ancient civilization, but their history, biology and culture are still poorly known.

Thousands of years ago, members of this species faced persecution from other races which feared them for their abilities. As a result, most of them came to reside on a small rogue planet in the Omarion Nebula, located in the Gamma Quadrant.

The Changelings are extremely non-conventional lifeforms. Their natural state is that of a golden liquid, but they are able to take virtually any form they wish, including solids, liquids, gases and even plasma or fire. Inexperienced Changelings, such as Odo, must return to their liquid state every 16 hours. It's not known whether the same applies to older and more experienced individuals, who have demonstrated abilities that Odo hasn't mastered yet.

A Changeling's body is not made out of cells, but of a biomolecular structure known as their morphogenic matrix. The lack of cells means that Changelings are not affected by senescence, being biologically immortal as a result.

They have no sense of smelling and their minds cannot be read even by naturally telepathic species.

It appears that when a Changeling assumes a specific form, it does not only mimic its external appearance, but its molecular structure as well. When they become rocks, for example, a sensor will not detect them as lifeforms. They are able to morph themselves into fully functional electronic devices. This doesn't make them vulnerable, however, since they can immediately return to their liquid state at anytime. Another interesting aspect of their shapeshifting abilities is that when they morph into a much smaller object, they are able to truly reduce their apparent mass and weight, rather than just compress their volume. The object in question will weigh no more than the expected.

Changelings do not eat or drink, and need no air or any other substance to live. They are perfectly able to survive in space vacuum for unlimited periods of time. Since they need no sunlight either (their adopted homeworld has no sun), it is a complete mystery how they get the energy they need for living.

One possible idea to explain both the Changelings' mass alteration abilities and how they obtain energy is that they are able to exist in subspace, as well as in normal space, regularly importing and exporting mass and energy between the two.[1]

A Changeling masquerading as another humanoid can be exposed by taking a blood sample, since the part of the Changeling separated from the rest will revert to its natural liquid state. This is a characteristic that they share with the mysterious "Thing" species.

Changelings are an ancient race believed to have originated somewhere in the Gamma Quadrant. Once peaceful explorers, they suffered prejudice from several "solid" races, who were afraid of the Changelings' almost unbelievable powers and resilience.

The Changelings finally decided that the best way to protect themselves was to take control of their surroundings, and thus they founded the Dominion, a major military organization that rules most of the Gamma Quadrant. The Changelings (or Founders, as they are usually referred to) are the absolute rulers of the Dominion, but are still very reclusive and enigmatic, being treated as god-like mystical entities by their servant races. The warriors of the Dominion are Jem'Hadars, a violent humanoid species genetically created by the Founders.

Although all Founders are Changelings, not all Changelings are Founders. The most notable exception is Odo, a member of a group of one hundred Changelings who were sent out to travel through the galaxy and gather information about other planets and races when they were still infants. After countless years of drifting through the cosmos, Odo was found by the Bajorans and ended up working for the Cardassians and later on the Federation as chief of security aboard the space station Deep Space 9.

Most Changelings have little sense of individualism. They enjoy merging themselves together to become part of what they call the Great Link, a gigantic ocean of Changelings in their natural liquid form, all deeply interconnected on a physical and mental level (the result is similar to the sentient planetary ocean of Solaris).

The Great Link used to be located on a rogue world in the Omarion Nebula, but this planet was abandoned in 2371, as an infiltrated Changeling posing as a Romulan Tal Shiar agent became aware of a plot by the Cardassian Obsidian Order to destroy the Changelings' homeworld and fatally cripple the Dominion. In addition to evacuating the planet, the Changelings also took the opportunity to plant 150 Jem'Hadar warships waiting to ambush the Romulan and Cardassian fleets, resulting in the Battle of the Omarion Nebula. Following the success of this operation and heavy losses for both the Romulans and the Cardassians, a Changeling agent claimed that the only threats that still remained to them in the Alpha Quadrant were the Klingons and the Federation.

Changelings are so isolated that some species in the Gamma Quadrant regard them as just a myth, being unaware that they're the real force behind the Dominion.