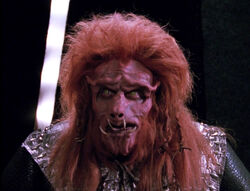 The Chalnoth are a sapient humanoid civilization from the planet Chalna. They are beast-like mammalian bipeds with two sets of sharp tusks protruding from their lower lips.