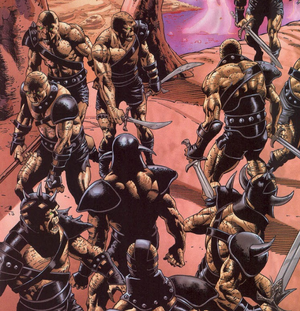 The Ch'ngroons are a alien species from the Negation Universe in CrossGen Comics.

The Ch'ngroons appear to be one of the many thrall species that the Negation Empire has under its command. They seem to be primarily warriors, utilizing medieval equipment compared to the rest of the Negation forces.

Retrieved from "https://aliens.fandom.com/wiki/Ch%27ngroon?oldid=172897"
Community content is available under CC-BY-SA unless otherwise noted.