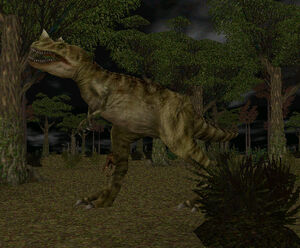 Ceratosaurus mostly hunts small animals, like Ankylosaurs or small sauropods. Ceratosaurus hunts by rushing at its' prey and chasing it and either flipping it over or impaling it.

Ceratosaurus has a very green and plant-like look. This makes it blend in very well with the surrounding plants and makes it very hard to spot in jungles.

In Carnivores: Dinosaur Hunter HD and Reborn is much more anatomically correct and is red instead of the green that was in the original games.

Retrieved from "https://aliens.fandom.com/wiki/Ceratosaurus_(FMM-UV_32)?oldid=172602"
Community content is available under CC-BY-SA unless otherwise noted.