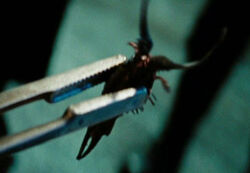 Star Trek
Centaurian Slugs are small non-sapient parasitic insectoids which enter a living host's body through the mouth and wrap themselves around the brain stem, releasing a toxin that produces a truth drug effect on the victim. Its appearance and lifestyle are somewhat reminiscent of Ceti Eels.

According to deleted material from Star Trek, these slugs are used by Klingons to interrogate prisoners in the penal asteroid of Rura Penthe.