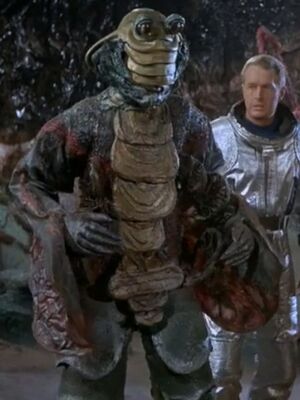 Voyage to the Bottom of the Sea
The Centaurs are a spacefaring humanoid species hailing from the double-planet Centaur, which they refer to as being in a "distant part of this galaxy". They're a vaguely insect-like species, with spherical eyes atop their heads and membranous flaps on their arms.

They also have an outpost on the planet Venus, from which they have been monitoring Human activity in space, fearing that if Humans keep on their space exploration they may become a threat to the Centaurs in the future.

Retrieved from "https://aliens.fandom.com/wiki/Centaur_(Voyage_to_the_Bottom_of_the_Sea)?oldid=171152"
Community content is available under CC-BY-SA unless otherwise noted.