Celestialsapien is the native species of the Forge of Creation, and are defined as "Transcendent Aliens".

Celestialsapiens are silhouette-like humanoids that can range from any size. The inside their bodies resemble outer space, and they have white star-like dots scattered inside their body. Their head has three trident-like horns on the forehead, two horns on each side of their head, or a flaming top. Their face only consists of white eyes with no pupils and no mouth, although some males can grow beards.

Celestialsapiens prefer their shrouded existence in a dimension known as the Forge of Creation, as opposed to being involved with the rest of the universe. Much like their birthplace, Celestialsapiens exists outside of time and space itself. In other words, they are simultaneously everywhere and nowhere at the same time.

Celestialsapiens have their own unique personalities, consisting of a masculine voice of rage and aggression and a feminine voice love and compassion. Both of the personalities must agree on something for any actions to take place.

Most Celestialsapiens only have two personalities, yet Alien X has three with Ben Tennyson being a voice of reason. Consequently, two out of three must agree on something in order for Alien X to perform any sort of action.

According to Kevin Levin, it is very dangerous to disturb them while debating as "they can just blink, and [you would] be gone".

Celestialsapiens are omnipotent, being able to warp reality, time, and space with ease and at any level they wish. Even their thoughts can become real on a scale sufficient to recreate an entire universe if necessary. In short, Celestialsapiens can do anything such as:

Celestialsapiems' reality warping is so powerful that the personalities can even prevent their external body from being destroyed just by agreeing that it will not.

Celestialsapiens are left in an inactive state for as long as the personalities are debating amongst themselves, though Ben has managed to overcome this weakness by convincing Bellicus (Alien X's voice of rage) and Serena (Alien X's voice of love) to give him full control of the form in exchange for letting them debate with each other in peace.

Celestialsapiens are unable to manipulate mana directly because they would have to alter the universe to change the nature of mana, and the personalities would have to agree.

Celestialsapien personalities are capable of experiencing fear in the presence of Toepick's species.

A Celestialsapien's actions onto reality can be neutralized and reversed by the intervention of their own brethren.

Despite their nigh-invulnerability, Celestialsapiens are unable to survive on the planet Anur Vladias. They are also unable to survive omniversal or timeline destruction unless groups of them combined their powers with one another in advance.

The Omnitrix's Celestialsapien representative is named Alien X, who first appeared in the Alien Force episode "X = Ben + 2". Alien X has appeared in almost every subsequent series except the reboot.

According to Professor Paradox, an alternate version of Albedo turned into Alien X and was trapped motionless for nearly a year.

According to Duncan Rouleau, Ben 10,000 has Alien X available in his Omnitrix. However, the Alien X used by both the Prime Timeline Ben and Ben 10,000 is the same, not just genetically, but literally.

The following theories have been made to explain Alien X's creation and existence, which seems to come into conflict with that of other Celestialsapiens: 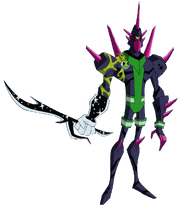 Skurd creating an arm and sword out of Celestialsapien DNA

A male Celestialsapien as seen in Ultimate Alien

A male Celestialsapien as seen in Omniverse

A female Celestialsapien as seen in Ultimate Alien

A female Celestial sapien as seen in Omniverse

A newborn Celestialsapien
Add a photo to this gallery

Celestialsapien is a play on "celestial," meaning from the stars, and "sapient," a term for intelligent.

Retrieved from "https://aliens.fandom.com/wiki/Celestialsapien?oldid=160090"
Community content is available under CC-BY-SA unless otherwise noted.