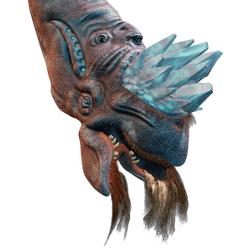 Eternal Cylinder
The Celestial Trewhaala is a peculiar, almost godly creature that lives within the Stratosphere.

These creatures are extremely long, almost impossible to see the entire creature whenever it appears. It has a serpentine body, often described as a serpent by the Trebhum, and its head is crowned with crystals. Its mouth is split in the lower jaw, and has whiskers all along its muzzle.

Very little is truly known about this creature. What is known of it is that it only appears in specific areas of the planet to guard locations where the Trebhum "sing" to call it down.

They are summoned to guard Trebhum Temples.

It is revealed, once the player acquires the trunk mutation that allows the Trebhum the trunk mutation to speak their language, that the Trewhaala and the Trebhum used to be ancient friends, but, over the years as Trebhum civilization fell, the song was forgotten by new generations. At this point, the Trewhaala are dying out, and few of them remain, but they guide the Trebhum to ancient artifacts that contain memories of what was lost to them when the Cylinder came.

In the end, once the Trebhum recover the Trewhaala's artifacts, the Trewhaala ferry the Trebhum onto a floating palace to escape the Cylinder, and battle the Mathematician in the game's final standoff.

Although rarely studied, some unique abilities have been noted.